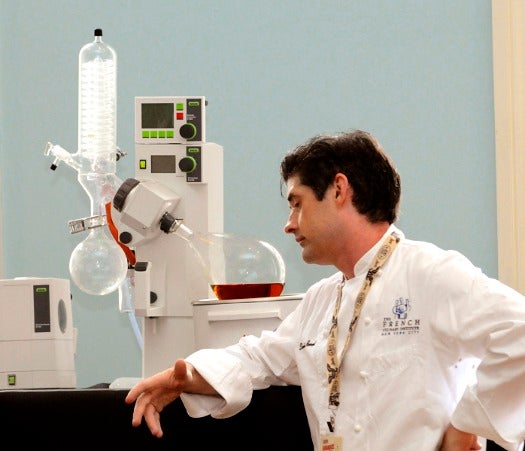 As I write this, I’m sipping three aged Scotches that have been fractionated into some nine glasses. It’s mid-afternoon. Yes, I am at the Tales of the Cocktail convention in New Orleans again — one part learning and one part drinking, served straight up. Some people prefer to vary the proportions slightly.

When you drink whisky, you’re drinking the wood it was aged in. That’s easy to understand in concept, but friend of PopSci Dave Arnold is here to spell it out for our taste buds: He has set up his laboratory evaporator and physically separated out the flavor components in a glass of Glenlivet so they can be sipped individually.

As a basis for comparison, we start by tasting an unaged Glenlivet whisky. This is the “white dog” or “cleric,” the spirit just as it comes out of the still, clear as water and with a floral, rough papery taste that’s miles away from the familiar taste of Scotch. This stuff isn’t typically supposed to leave the distillery: It stays there in oak barrels till it’s hit its 12th birthday at least, and picked up its amber color, smooth contours, and recognizable flavor, all from the wood of the barrel. Indeed, the next glass we taste is the bestselling Glenlivet 12-year-old, with its vanilla roundness.

Now the fun begins — or at least a more scientific sort of fun than just drinking Scotch. The evaporator uses a process of vacuum distillation at room temperature to separate liquids based on their relative volatility. Running a liter of Glenlivet 12 through the machine, Dave pulls off the first 600ml into one vessel and the remainder into a different one. We taste the two.

The elements drawn from the oak, including all of the brown color, are less volatile, so they remain in the 400ml batch. The 600ml batch Dave calls “gray dog,” since it is a re-approximation of the white dog: a startling “deconstructed whisky” that’s been aged for 12 years in oak and then had many of the effects of the oak removed. It also has the bulk of the alcohol, concentrated to 120 proof from the original Glenlivet’s 80 proof. Its flavor is mellower than the white dog’s, but that youthful papery flavor, which was imperceptible in the non-evaporated Scotch, is back in evidence. The vanilla tones that the oak contributed are deeply muted, leaving a soft, ill-balanced, cloying clear spirit that reminds me of souring milk.

Almost magically, the familiar Scotch of liquor stores and bars emerges from two components that aren’t either really recognizable as Scotch.The 15-year-old variety, however, makes a great gray dog. It’s got back the balance that’s lacking in the gray 12. The paper and grain flavors are offset by a melony, citrusy sweetness. Innovative bartender Eben Freeman, sitting next to me, insists he tastes a briny umami flavor that reminds him of seaweed, but I’m not sure it’s there for me.

Side by side with the gray-dog component of the 15-year-old, we taste its other half, the amber-colored distillate that contains the woodiness. There’s not much to it besides its vivid color, really — a faint bitterness, a faint barkiness. It’s very low in alcohol compared to the original, and since alcohol is a prime carrier of flavor, that doesn’t help. Out of curiosity, I find an empty glass and mingle the 15-year-old gray dog with the 15-year-old wood component, reuniting the parts that have been separated. Almost magically, the familiar Scotch of liquor stores and bars emerges from two components that aren’t either really recognizable as Scotch.

I would pay for a bottle of the separated-out 18-year-old. It’s got more complexity than any of the younger ones, and I even taste that saltiness Eben mentioned, which I think comes from the used sherry casks in which a portion of this Scotch is aged. Dave Arnold has taken the wood component of the 18-year-old and made it, with cream and sugar, into an ice cream, which he freezes in a messy shower of liquid nitrogen before our eyes. The idea of oak ice cream is not the most appealing, but what comes through is the vanilla, spice, and maple notes of the wood — as well as an inescapable flavor of briny lumber, like I’m eating an ice cream cone while strolling on an old sea pier. Wash down the wood ice cream with the matching gray dog whisky and the combination instantly comes together as a creamy aged Scotch on the tongue.

It’s been an enlightening drinking session, and we’ve only separated each Scotch into two parts. The rotary evaporator is capable of much finer fractionation than that; carefully wielded it could in theory pull out just the flavor component of Glenlivet that’s reminiscent of pear, or just the briny note, and so on. And that’s just using the device for separation. It can also be used to combine flavors, as Dave demonstrated in another Tales session, when he put fresh mint and caraway into the receiving end of the evaporator, in a bath of vodka. The co-distillation of those elements resulted in a new liquor, melding the fresh, volatile flavors of the plants in a never-before-tasted way, while leaving behind their grassier, heavier flavor elements. The key flavor compounds in spearmint and in caraway are stereoisomers of each other, R-carvone and S-carvone, so they play together in the mouth in an intriguing three-dimensional way.

Such are the culinary adventures you can have with laboratory technology. I’m eager for more. 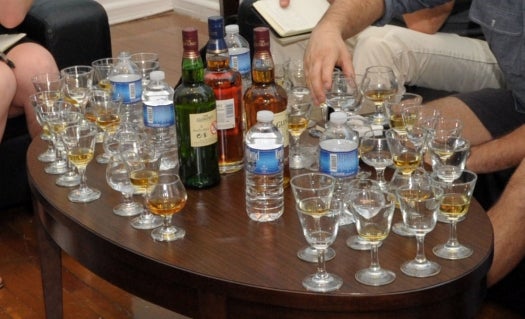