Twitter's new music app creates a playlist of the music that's blowing up on your Twitter feed. But is that the kind of music you want to listen to? 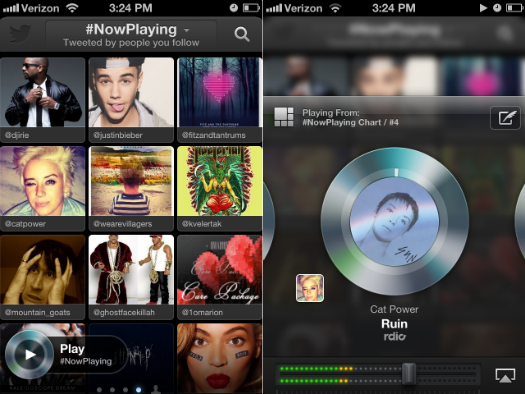 Twitter released its music service today, for web and iOS devices like the iPhone. It taps into your Twitter feed to recommend music through four channels, the most interesting of which is “NowPlaying,” made up of the stuff the people you follow have tweeted about. If you have a paid Rdio or Spotify subscription, you can then listen to the full tracks as a kind of Twitter-curated playlist. It’s slick and simple and works really well!

But here’s the problem: do you really want to listen to a playlist created by the people on Twitter, even the people you follow?

On Rdio and Spotify, sharing and figuring out what your friends are listening to are big parts of the service. On Rdio, you manually create new friend lists, and Spotify taps into your Facebook friend list. But Twitter is an entirely different beast than either of those methods of collecting friends.

Facebook is entirely made up of your friends; Facebook has been doing its best to insert brands and news sources and things like that into the service, but your friends list is a list of your friends, pure and simple. It’s even unlikely that your list of friends includes all that many people you don’t know in real life. So it stands to reason that you’d be interested in the music tastes of at least some of them, and hopefully most of them.

But Twitter is not exactly a social network in the classic sense of Facebook and MySpace. It’s not a web of profile pages; it’s a publishing and consumption platform. So your Twitter feed is likely to have lots of people you don’t know in real life, lots of accounts belonging to entities which are not people, and even some people you actively dislike. I follow a variety of news sources and journalists both as part of my job and to stay generally informed. My following them isn’t a declaration of support; I don’t always like these people, nor do I particularly care what music they’re listening to.

Then, too, there are people I follow for entertainment or all sorts of other reasons. I participate in the #followateen trend, in which you find a teen, any teen, and follow them, just to see what’s going on in their little teen world. My teen hates trigonometry and has a big crush on someone named Matty McKibben. She is fascinating, but I don’t need her to create a playlist for me.

But the other side of that coin is that sometimes this is what Twitter is: a firehose of stuff you may or may not like, may or may not agree with, may or may not expect. My Rdio “heavy rotation,” consisting of what my friends are listening to, is reliably good; we all have fairly similar tastes. But to get something completely out of left field, something I’d never investigate on my own, maybe it needs to come from someone like a 16-year-old who is thrilled that she can wear flip-flops to assembly but is worried about stubbing her toe.

I suspect that’s what people will see. The other channels in the Twitter Music app are less promising; there’s “Popular,” kind of the top 40 of Twitter; “Emerging,” very slightly less popular stuff (mostly indie rock); and “Suggested,” which looks through your own tweets to suggest stuff you might like based on what you’ve tweeted about. “NowPlaying” is the one category that Twitter can do that nobody else can do better. “Suggested” will be better on Pandora, top 40 is top 40, and there are lots of places more capable than Twitter of recommending emerging artists, so it’s the ability to use your personal Twitter feed as a music recommendation service that’s the most promising element.