Yves Rossy, a.k.a. “Jetman,” made good on his promise to dazzle onlookers at the Grand Canyon this morning by flying... 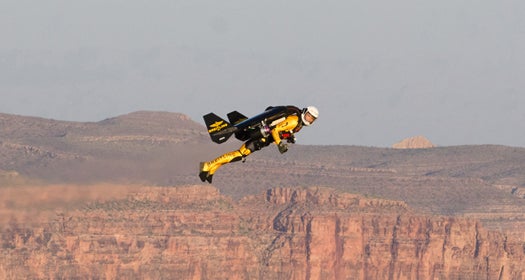 Yves Rossy, a.k.a. “Jetman,” made good on his promise to dazzle onlookers at the Grand Canyon this morning by flying his one-of-a-kind jet-propelled wing through a leg of Grand Canyon West in Arizona, soaring just 200 feet above the rim of the canyon itself. The feat marks Rossy’s first U.S. flight–as well as his first run-in with our Federal Aviation Administration.

The flight itself went off without a hitch once Rossy was allowed to get underway. Leaping from a helicopter about 8,000 feet above the canyon floor, Rossy picked up speed and fired up his jet-wing, which he steers using his body as a kind of rudder/aileron. Four small jet motors provide him with enough speed and lift to sustain flight, this particular one lasting a full eight minutes. During the demonstration Rossy hit speeds of 190 miles per hour before powering down his engines and parachuting safely to the canyon floor.

Rossy’s Grand Canyon flight was originally scheduled for last Friday morning, you may recall, but was suddenly and inexplicably scrubbed. The reason, it turns out, was bureaucratic. The FAA didn’t know how to certify Rossy’s first-of-its-kind jetwing, which he envisioned and designed himself with the help of a few sponsors and friends. Certification in hand, Rossy was finally able to make the flight this morning.

Check out the video: