Video: Simon the Robot Can Tell When It’s Being Ignored, And Try To Get Your Attention 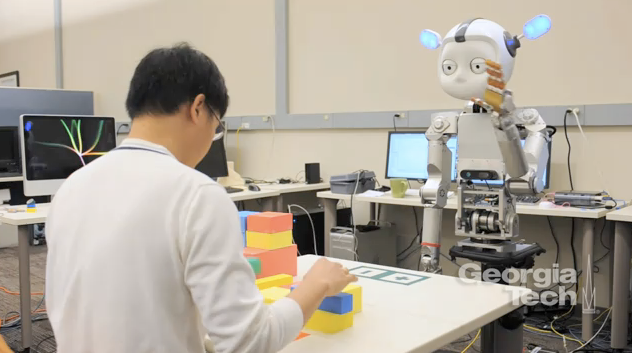 A new robot can tell when it’s being ignored, and it politely and subtly gets a person’s attention. Researchers say the new computer vision system could help robots and humans interact more effectively, by allowing robots to use the same social cues as people.

Simon the robot, developed at Georgia Tech’s Socially Intelligent Machines lab, uses a camera to figure out when a person is interested in interacting with it. It watches their behavior and uses some form of gesture, like waving its hand, to get noticed.

Then it has to figure out whether it actually captured the person’s attention. Using only the camera as a guide, Simon achieved about 80 percent accuracy in determining when he had gotten someone’s attention, according to Aaron Bobick, professor and chair of the School of Interactive Computing at Georgia Tech’s College of Computing.

Check out the video below in which a volunteer constructs something out of colorful blocks, under Simon’s watchful eyes. Simon’s timid wave interrupts his concentration, and he waves back.

The goal is to help robots understand when to sit and be quiet and when it’s appropriate for them to get a human’s attention. People can figure this out pretty easily with simple body language, but it’s not as obvious for a robot. Remember Furby and its insistent, insipid desire to play, even when you didn’t feel like it? Simon is apparently a little more polite.

“In order for these robots to work with us effectively, they have to obey these same social conventions, which means they have to be able to perceive the same things humans perceive in determining how to abide by those conventions,” Bobick explains.

Other roboticists at Georgia Tech are helping robots learn whether they want to deceive other robots or humans, and then carry out a deceptive strategy to that effect. No word on whether these technologies would ever be combined, so robots could figure out when we humans aren’t paying attention and then carry out their devious world-dominating plans.