Radio communications devices can either send or receive wireless signals at a given moment, but they can’t do both at... 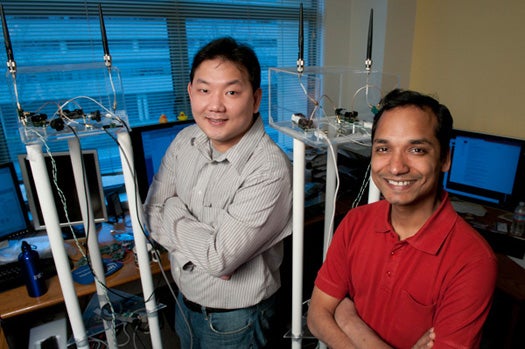 Radio communications devices can either send or receive wireless signals at a given moment, but they can’t do both at the same time (hence the regular use of the word “over” to signal the end of a transmission). But a team of electrical engineering grad students and professors at Stanford has done what researchers have long thought impossible by developing a new antenna setup that allows wireless signals to be sent and received at the same time.

That may not seem earth-shattering–cell phones allow simultaneous two-way communication after all–but given the fact that the breakthrough essentially doubles the speed of communications networks immediately, it’s actually somewhat huge.

Cell phone networks employ a complicated and expensive technological trick to allow for simultaneous two-way conversation, and that work-around isn’t feasible for all networks. This new system won’t just benefit long-haul truckers and air traffic controllers–though it certainly will benefit them. Where it could really shake up our everyday realities, it seems, is in Wi-Fi, which could become much, much faster using this kind of technology.

When a wireless transmitter is sending out a signal, that signal is million of times stronger than any incoming signal; as such, the transmitting signal drowns out any incoming communication. So the Stanford team devised a means for a receiver to screen the noise from its own transmitter out, much as our brains can screen out our own voices when we are both speaking and listening (this is explained in much greater detail in the video below).

As a result of this noise canceling the receiver can hear incoming traffic clearly. That means in a Wi-Fi network, for instance, computers could both send and receive packets of information simultaneously, potentially doubling efficiency in a given time frame (at least at the moments when you are both sending and receiving signals). The possibilities don’t end there. Check out the video below for more.