Your Chevy Volt may draw adoring smiles from that cute, crunchy barista you’ve been eyeing at the coffee shop, but... 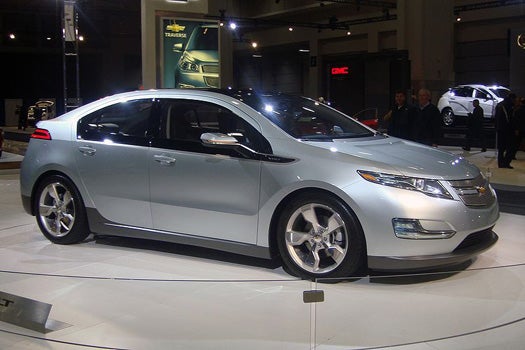 Your Chevy Volt may draw adoring smiles from that cute, crunchy barista you’ve been eyeing at the coffee shop, but be advised: it may also draw rats. At least that was the experience of Cars.com correspondent Joe Wiesenfelder, who was forced to confront an unforeseen problem with the website’s Volt after a rodent made a cozy home among the car’s warm batteries.

When the Volt is charging, its batteries maintain a minimum battery temperature. Wiesenfelder’s Volt was charging in Cars.com’s downtown Chicago parking garage during last week’s Chicago blizzard, where it weathered the storm just fine. But then he started getting emails from the ChargePoint network that monitors public charging stations like the one where Cars.com keeps its Volt (the site bought the car to see how it would survive a cold Chicago winter).

The next morning he reset the charger, which began charging the car again without problems. But the next time he got behind the wheel, the dashboard lit up with a host of warning lights. A rat, it turns out, had made itself comfortable among the warming batteries when temperatures plunged during the night, helping himself to wiring harness as a snack. The result: damage to the warning lights and the rear defogger device at minimum. The cost: at least $600 (acts of rats are not covered under warranty).

Of course, this is no demerit to the Volt itself; rats are part of life in the big city. The problem, as Wiesenfelder points out, is that he can control neither the rats nor the weather nor, in this case, where he parks his Volt–there simply aren’t that many charge stations for EV’s around the city at this point. Just a reminder that with all new technologies come problems both seen and unforeseen.

On the bright side, with the exception of the rat attack the Volt has performed flawlessly in lakeshore winter conditions for more than a month and 3,000 miles.