Researchers Create Moldable Metals That Are Stronger Than Steel

Plastics are great because they are so easily moldable into just about anything, but that manipulability also often introduces a... 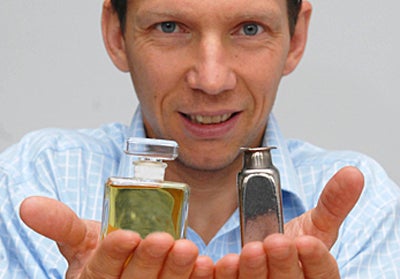 Plastics are great because they are so easily moldable into just about anything, but that manipulability also often introduces a degree of fragility as well. For high strength and durability, what you really want is a metal alloy of some kind. Now Yale scientists are doing away with this strength-moldability tradeoff by developing novel metal alloys that are as moldable as plastic.

The resulting materials are stronger than steel, yet easily formed under low heat and pressure into all kinds of shapes and forms. Materials scientists at Yale were looking into the properties of some recently developed bulk mettalic glasses–metal alloys whose atoms are randomly arranged rather than organized into highly-ordered crystalline structures–and found that they can be blow molded just like plastics while retaining their strength and durability.

The alloys–composed of common metals like copper, nickel, titanium and zirconium–can be blow molded via low pressure, low heat processes identical to those used to shape plastics, meaning they aren’t any more expensive to process than plastic. The raw materials–the metals themselves–also cost about the same.

They also work well at a variety of scales. Lead researcher Jan Schroers and his team are already using their new blow-molded metals to shape everything from small seamless containers and bottles to medical implants and miniature resonators for microelectromechanicals systems (MEMS), all with the strength and staying power of steel.

“This could enable a whole new paradigm for shaping metals,” Schroers said in a press release. “The superior properties of BMGs relative to plastics and typical metals, combined with the ease, economy and precision of blow molding, have the potential to impact society just as much as the development of synthetic plastics and their associated processing methods have in the last century.”