Today in clever science tricks: a new kind of microscopy that can see down to resolutions smaller than the wavelength... 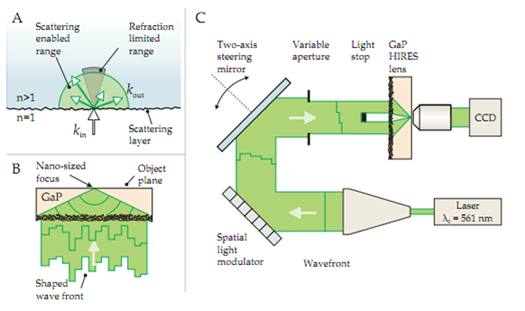 Today in clever science tricks: a new kind of microscopy that can see down to resolutions smaller than the wavelength of the imaging light itself. On its face, this shouldn’t be possible; the smallest resolution you should be able to get in the visible spectrum is about 200 nanometers because of the lower limits of visible light’s wavelengths. But with a special lens, Dutch researchers have used 561-nanometer laser light to image gold nanoparticles just 97 nanometers across. It’s the first lens to provide a sub-100 nanometer resolution with visible light.

So how do you cross that wavelength limit and image something smaller than the wavelength of the light itself? Their new lens is basically a frosted piece of glass–a transparent slab that’s etched on one side to scatter the light going through. Picture it with the etched side facing the light source; the light hits the etching and scatters, bending the wave front and producing distorted light from the other side.

The Dutch team (they’re from the University of Twente) measures this light distortion using a CCD chip, which gives them a reading of the distorted light’s shape. Using that data, they then send the light through the lens again, but this time they run it through a modulator that lets them distort the light to their liking. In this way they can actually inject light through the lens that’s already distorted in such a way that it cancels out the lens distortion.

But that’s not the trick. The real trick is tweaking the light just right so that it comes into a focal point that is much tighter than what can be achieved using a regular lens relying on only refraction to focus the light. The team’s setup is so spot-on accurate that they can actually move the focal point around, allowing them to scan back and forth over a nanoscale object and build an image.

Ninety-seven nanometers sets a new record for microscopy with visible light, but the team says with a bit more work they can get the resolution down to 72 nanometers. That more than doubles the resolution of conventional lenses, and could make microscopy in the visible range capable of resolving things like nanoelectric circuits or organelles that were previously too small to image with visible-light tools.

For the entire paper on the imaging method, check out arXiv.