This robot bowler, cheekily named EARL, is capable of laying down the exact same, utterly perfect shot every time. Yet... 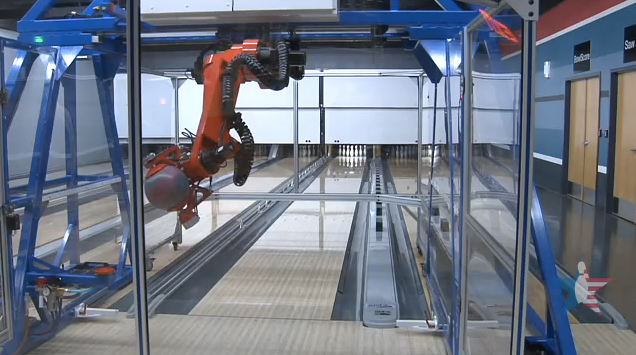 This robot bowler, cheekily named EARL, is capable of laying down the exact same, utterly perfect shot every time. Yet it still lost to professional human bowler Chris Barnes. How did this happen?

EARL, which stands for Enhanced Automated Robot Launcher, a hulking behemoth (rather than a delicate dancer) of a machine, is actually a tool used for specs and certification at the United States Bowling Congress (not to be confused with the United States Congress, a marginal political organization which boasts not a single expert bowling robot). The robot is capable of throwing balls anywhere between 10 and 24 mph, as well as putting a spin of between 50 and 900 rpm on its throws.

Chris Barnes is one of the best professional bowlers in the world, the holder of 12 PBA tour titles, and is able to bowl with either hand. That being said, he is much smaller and less threatening than EARL, and cannot be controlled by touchscreen. So how did he best the top robot bowler, 259-209?

Turns out EARL’s precision and ability to throw the exact same way might have been his downfall. Since every throw was so similar, over a few throws, the ball wore down the oil on the lanes, which caused some unforeseen behavior. EARL was unable to adjust quickly enough, and Barnes threw what we in the know call a “seven-bagger”: a whopping seven strikes in a row. That put him over the top–in this game. EARL has been known to throw a perfect 300 in the past.

[Bowling Digital via [Cnet via BotJunkies via Gizmodo]