NREL’s Zero-Energy Research Building, Largest in Nation, Generates as Much Power as it Uses

The National Renewable Energy Laboratory is the Department of Energy’s green tech incubation lab, so perhaps it’s no surprise that... 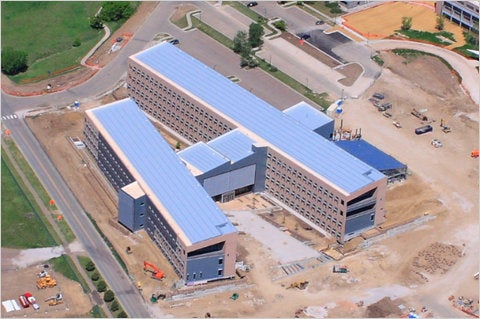 The National Renewable Energy Laboratory is the Department of Energy’s green tech incubation lab, so perhaps it’s no surprise that the research agency is attempting to lead America to greener pastures by example. The NREL just put the finishing touches on its new Research Support Facility (RSF) in Golden, Colo., — the largest zero-energy office building in the nation — hoping other developers will follow its lead.

The 220,000 square-foot facility will be home to more than 800 employees when it opens its doors in August, and is expected to achieve platinum LEED certification, the highest distinction a building can get from the U.S. Green Building Council. To create a structure that consumes no more energy than it produces in a year, the engineers behind the office complex took into account both the technologies of the future and the building practices of the past.

For instance, before electric lighting and climate control became ubiquitous architects situated and designed buildings to take advantage of natural light, with lots of windows that also provided ventilation. A slender 60-foot width and an east-west orientation allow lots of natural daylight to illuminate interior spaces of the RSF. That centuries-old building practice is coupled with smart technology that constantly compares interior and exterior temperatures, and even sends messages to occupants’ computer screens when its time to open or close the windows for optimum natural climate control.

The building is also built largely of recycled or reclaimed materials, and the exterior is designed to absorb heat from the sun that can then either contain the heat during the day during warmer months or release it into the building during cooler months. The interior climate is further controlled using an radiant system that uses water pipes embedded in the floor to circulate either hot or cold water.

Of course, the NREL’s new green building pales in comparison to China’s ambitious 800,000 square-foot “Sun Dial” office building or the scope of projects like Masdar City outside Abu Dhabi. But it’s a good — and good looking — first step toward better building practices. To make sure the drive for net-zero architecture doesn’t stall in Golden, the NREL will be offering its design for the building to developers for free starting this fall.