Big problems call for big responses, and while armchair pundits and denizens of the blogosphere pick apart the government response... 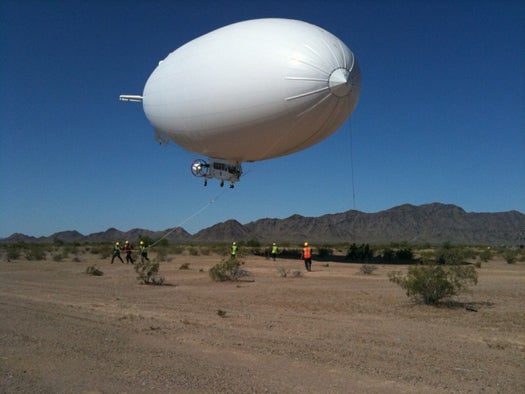 Big problems call for big responses, and while armchair pundits and denizens of the blogosphere pick apart the government response to the BP oil spill, the Navy is bringing out the big guns to help with the containment effort. The Navy’s massive MZ-3A Airship is expected to arrive in the Gulf sometime today (or perhaps a bit later — airships travel slowly and are subject to the whims of the weather) to support and coordinate skimming efforts and keep an eye out for injured animals along the coastline.

The airship — the first to enter the Gulf cleanup effort — began making its way toward the spill site from Yuma, Ariz., last month and will operate form a mooring near Mobile Bay, Ala. A handful of sensors are being considered for use aboard the airship, including the electro-optical, infrared and radar sensors already used on some support aircraft.

But the real advantage of having an airship on hand is its low operating speed. The MZ-3A can stay aloft continuously for 12 hours while monitoring a large swath of territory at low speed, greatly enhancing the capacity for raw visual observation and helping crews to coordinate skimming, burning, and dispersing efforts below. The airship is also far more economical to use over extended periods than the helicopters and airplanes currently assisting in the cleanup effort.

Crews will also report on the location of any affected wildlife they observe, relaying locations to Incident Commands that will dispatch crews to find and clean up oil-tainted fauna along the shoreline.