Gearing Up For a Manned Mission To an Asteroid

The Plymouth Rock project could be a stepping stone to Mars 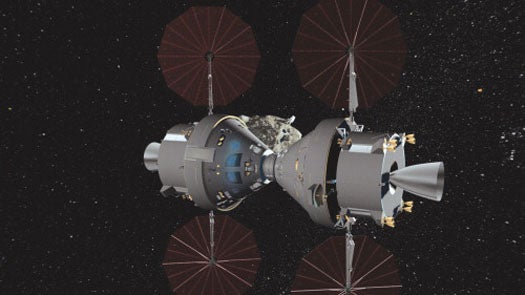 Cue the Aerosmith soundtrack; a plan to send a manned space mission to land on an asteroid is gaining traction within both NASA and the aerospace industry as experts look to bridge the feasibility gap between lunar missions and an eventual rendezvous with Mars. Of course, no party is ruling out the possibility of an Armageddon-esque trip to a Near Earth Object (NEO) on a harmful trajectory, should the need arise in the future.

While neither NASA or the White House has signed off on — or even offered funding to study — such a mission, briefing charts put together by Lockheed Martin, maker of the space agency’s next-gen passenger spacecraft, detail how a mission might work. It’s not as far-fetched, or far away, as one might think, with a mission to an NEO possible in a 2020-2025 time frame.

In Lockheed’s scenario, aptly titled “Plymouth Rock,” a two-person Orion craft would hook up with an unpiloted sister craft loaded with extra water, oxygen and other supplies. Orion would not land on the NEO itself, but would post up nearby while astronauts use jet backpacks to reach the object’s surface. That’s right: jetpacks.

Once there, scientists could gather compositions samples of the rock and set up other scientific equipment that could be left behind on the NEO. That information would be extremely valuable to science, not to mention give scientists the upper hand should a worrisome rock ever come hurtling directly toward earth.

Right now it’s only an idea on a briefing board, but both NASA and aerospace industry wonks feel like the mission is not only feasible, but could offer invaluable experience as a stepping stone between current low earth orbit excursions and forays deeper into space.

Did we mention there will be jetpacks?