Generating biofuels from bacteria would be easier and potentially more efficient than producing it from plant matter — if it... 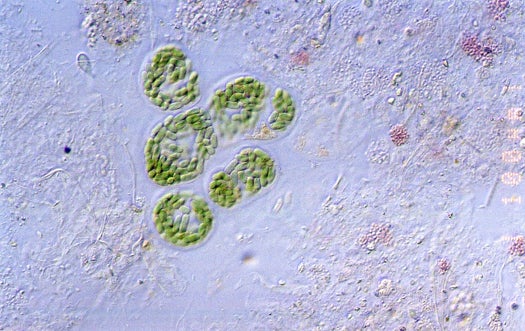 Generating biofuels from bacteria would be easier and potentially more efficient than producing it from plant matter — if it weren’t for the energy-intensive chemical reactions needed to extract the fuel from the bacteria after they’ve manufactured it. But the most promising sources of bacterial fuel, like cyanobacteria, are wrapped in multiple layers of protective membranes that make it difficult to get at the fatty material. So a team of Arizona State University researchers got an idea: why not blow the bacteria wide open from the inside with a genetically engineered bomb?

Bacteriophages are the sworn enemy of bacteria, latching onto them and pumping them full of foreign genetic information that eventually causes the bacteria to burst. So the ASU team inserted into the bacteria bacteriophage genes that are triggered by the presence of nickel. Then they waited for their cyanobacteria to fatten up.

At harvest time, the researchers simply added nickel to the bacteria’s growth media. The nickel was consumed, triggering the genes which in turn kick-started the production of membrane-eating enzymes inside the bacteria. In time: a very tiny boom. The bacteria are blown open, attacked from the inside out, their fatty cargo now easily harvestable.

The bacteriophage genes act as a kind of Trojan horse, waiting inside the membrane for the signal to attack. Since the process of blowing open cyanobacteria from the inside is completely natural, it doesn’t require the high costs or energy expenditure associated with existing chemical or physical methods. Not to mention it’s far cooler.