As evidenced by NASA’s confirmation last week of an asteroid collision observed by Hubble, there are plenty of objects careening... 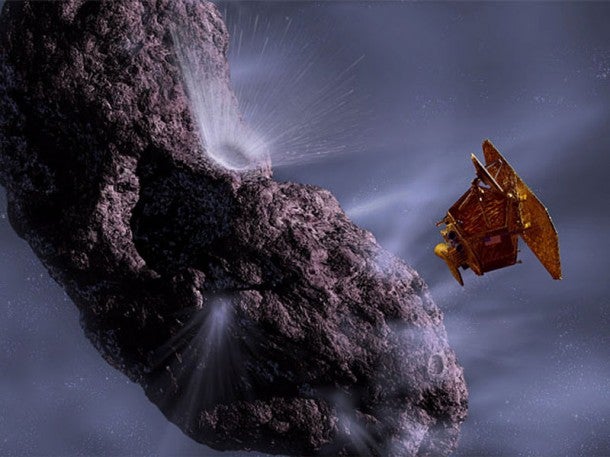 An artist's rendering of NASA's Deep Impact probe, which crashed into a comet in 2005. NASA
SHARE

As evidenced by NASA’s confirmation last week of an asteroid collision observed by Hubble, there are plenty of objects careening around the solar system that we don’t know about. Some of these space rocks could do some serious damage if the Earth’s gravitational field ever pulls them in.

Apollo 9 astronaut Rusty Schweickart has some ideas about how to deflect them: Smash into them with kamikaze probes and tug them away using gravity tractors.

In an interview with the Space Fellowship, Schweickart describes two types of asteroid deflection campaigns: fast kinetic impacts to push them into a different orbit, and slow gravitational tugboats of a sort that would change the asteroid’s trajectory.

Odds are, if an asteroid is headed for Earth, NASA and its partner agencies will be able to see it a while before it gets too close for comfort. A 10- to 15-year window is plenty of time to send up a tracking probe to fly in formation with the asteroid, Schweickart says. This would help scientists pinpoint its exact location and determine its trajectory, which would help them decide if they need to knock it away. A NASA team based at Ames Research Center proposed just such a project to follow the asteroid Apophis, but it hasn’t been funded.

Schweickart suggests sending an impactor probe, not unlike NASA’s own Deep Impact, to crash into a threatening asteroid and move it away. NASA could use a Delta-sized rocket, but the space agency will probably need a heavy-lift rocket to reach far-off threats, he says. Incidentally, NASA’s budget bill includes funding for developing a heavy lift rocket, but it’s not clear what for — an asteroid hunt seems like as good a mission as any.

Schweickart says NASA should test this out to see if it would actually work. “We need to learn what you find out when you do something for the first time,” he says. Read the full interview here: