How To Turn Your Camera Into A Photosynthesis Detector

In about an hour, you can hack a camera to only display blue, green, and near-infrared light, which will give you a lovely view of plant life. 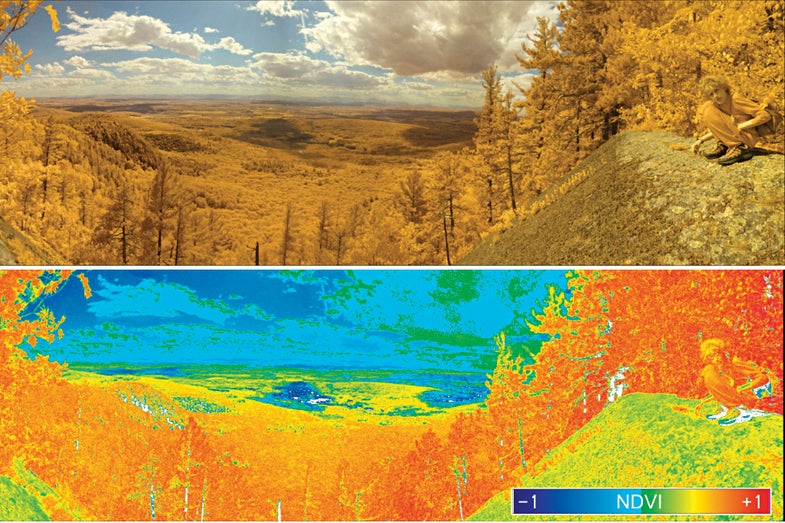 Note: Not all camera models are easy to hack, so attempt only with those you're willing to ruin. Courtesy Chris Fastie/public Lab
SHARE

Members of Public Lab, an online civic science community, wanted to build an inexpensive tool to measure plant health. Their solution: convert an obsolete camera into a photosynthesis detector, called the Infragram.

During photosynthesis, leaves soak up blue and red light but reflect invisible near-infrared light. The Infragram blocks red light and—because it’s missing a thin glass filter common to digital cameras—can detect near-infrared light. This way, the camera sees only blue, green, and near-infrared, and Infragram.org can convert the photos into colored maps of photosynthesis. If a farmer attached the Infragram to a drone, for example, he could get a read on his field’s health after a short flight.

You don’t need to buy a camera to see plants like Superman. Grab an old point-and-shoot—preferably one with custom white balance—and follow these instructions.

1. Remove the camera’s batteries, memory card, and any screws holding the outer casing together. The rear panel should pry off with little effort.

2. Push the LCD aside and unscrew the sensor. Move it out of the way too, and shake out the infrared filter. If the filter is glued on, it’s best to try another camera.

3. Reassemble the camera, and tape a square of Rosco #2007 blue-gel filter over the lens. (The camera can’t accurately measure photosynthesis without this.)

4. For each new scene, set the white balance with a piece of paper (blue works best). Snap photos of plants, and admire your otherworldly photography.

WARNING: Capacitors that power a camera’s flash can deliver a dangerous shock even long after batteries are removed. Attempt at your own risk.