A handy guide to the tech buzzwords from CES 2019

What the heck are haptics and why do you want them? 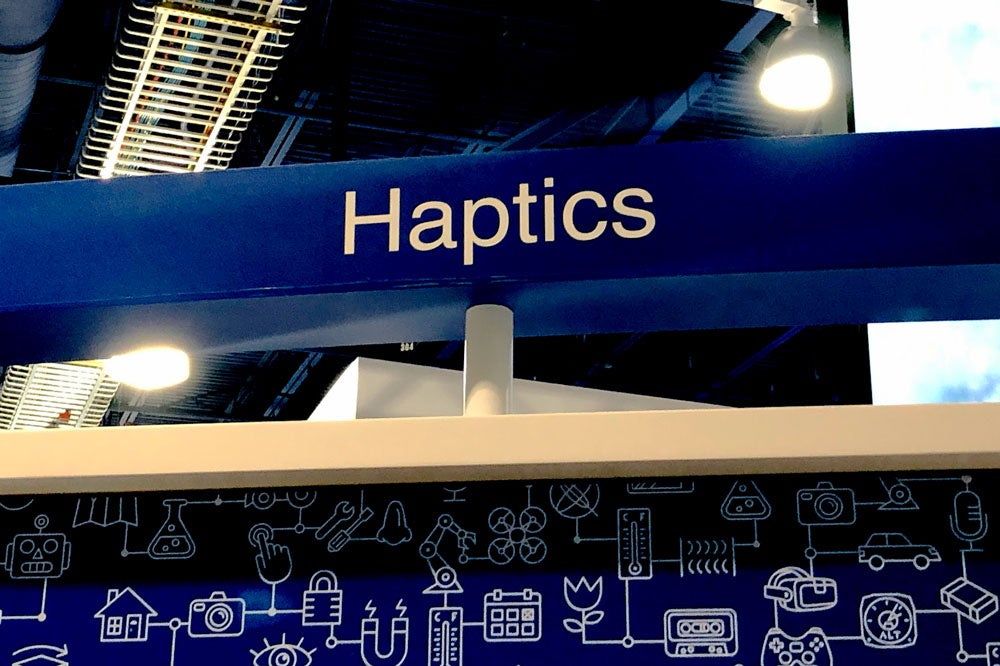 Walk around the Consumer Electronics Show and you’ll hear a variety of different languages. There is, however, a common tongue on the show floor—and it consists entirely of buzzwords, marketing terms, and acronyms. It can get confusing, so we put together this handy cheat sheet to help you decode the announcements, presentations, and overstatements you’ll encounter when reading about new products.

The king of buzzwords at CES 2019 is 5G. It mostly refers to the next-generation wireless data network that will eventually handle the internet needs of our mobile devices and even our home networks at some point in the future. To listen to many of the CES presentations, you’d think 5G is right around the corner, but the truth is that the technology is extremely limited right now. There are very localized tests going on in a few cities, but nationwide rollout won’t happen until 2020. Even once the network falls into place, we’ll still need mobile hardware that can take advantage of it, which we’ll probably hear about more during Mobile World Congress at the end of February.

This Wired story does a solid job explaining why you’re probably fine ignoring 5G for now.

TVs are always one CES’s biggest draws and this year’s theme is 8K. The name refers to a TV’s overall resolution. To be precise, 8K TVs and monitors have a resolution of 7,680 x 4,230 pixels. It’s the next step up from 4K, which is the most common ultra-HD resolution on the market at the moment. Right now, 8K TVs are mostly overkill because there’s almost zero content that supports the full high-resolution picture. Many high-end TVs like Sony’s new flagship TV do a fine job of upscaling 4K content, but 8K won’t be essential tech in 2019.

There are few buzzwords as broad as artificial intelligence. Products here at CES us “AI” to do everything from cook a chicken to drive a car down a crowded street. The truth is that AI can mean a wide variety of things. The common denominator is that computer algorithms are making some decisions within the product, likely using machine learning to be better at whatever it is they do.

So, when Panasonic’s in-car driver analysis system tries to figure out whether the person behind the wheel is falling asleep by analyzing their facial expressions, that counts as AI. When LG’s high-end TVs analyze the content showing up on its screen to help optimize picture quality, that’s AI, too. The examples go from simple to complex, but the bottom line is that AI is “cool” right now, and any product that can possibly claim to use it probably is.

There are quite a few virtual reality headsets on the CES show floor this year, including the new HTC Vive Pro with eye-tracking, and a preview version of the Oculus Quest, which is coming from Facebook’s VR arm later this year. Virtual reality involves immersing yourself as much as possible in a digital world that you strap to your face. So, VR headsets totally replace the real world with computer graphics rather than just adding digital elements into a real-world setting (that’s augmented reality).

A popular use for VR here at CES is to put it in cars to entertain passengers. Both Intel and Audi have superhero-themed VR experiences that sync up with the motion of the car in which you’re riding to help pass the time.

AR mixes digital objects into the real world. Think of things like when you use the Ikea app on your smartphone to envision what a new couch will look like in your space or you play one of those games where little spaceships fly around your office and you shoot them on your phone screen. Headsets with translucent screens that make digital objects appear in the real world also count as augmented reality. That includes headsets like the Magic Leap and Microsoft’s Hololens. As a general rule, if you can still see the real world either on a screen or through a translucent screen, you’re dealing with AR instead of pure VR.

While AR and VR are relatively straightforward to define, XR is more nebulous—in fact, the X really doesn’t even stand for anything. Some uses of XR act as a catch-all to represent both virtual and augmented reality. On a deeper level, XR is an effort to tear down some of the walls between augmented and virtual reality to make it easier for content creators to make content for any kind of headset users are willing to strap onto their faces. If you see XR in 2019, it’s probably referring to either augmented reality, virtual reality, or a mixture of the two.

Almost all of the high-end TVs you’ll see coming out of CES 2019 are OLED displays, including the flexible TV that LG made to roll-up into its base when it’s not in use. OLED screens work differently than older flat-panel TVs like LEDs or LCDs, which essentially required lights behind the pixels in the screen to illuminate the picture. But OLED TVs have pixels that light up on their own individually, which allows them to turn off completely when they’re supposed to be black. The result is a picture that appears brighter, and with more contrast, because of those blacker black levels. That’s obviously a reductive description of a rather complex technology, but the takeaway is that OLED is still the standard for high-end sets at the moment. If you spring for an OLED, you can expect to spend more money and get a very pretty picture.

Practically speaking, the eight-generation chips are the most current equipment on the market and it’s probably not worth waiting for the next wave of processors to start shipping to buy a new machine. Just because the ninth-generation now exists, that doesn’t mean the eighth-gen stuff is obsolete or even out of date.

At one point, the “wearable technology” market was almost entirely smart watches and dorky-looking glasses with some kind of screen crammed into them. Now, however, the term “wearable” has expanded to mean pretty much any piece of electronics that stays on your body to perform a task. So, Motiv’s smart ring that senses your heart rate and helps track your fitness data fits the bill. It’s a diverse enough category now that the umbrella wearables term is starting to feel a little out of date.

One of the next big advances in virtual reality involves taking your hands out of the equation. HTC’s new Vive Pro headset, for instance, can track where you’re looking by observing your eyeballs. So, you can accomplish tasks like changing settings and navigating menus just by focusing your gaze in specific spots.

Beyond that, developers can also use eye-tracking tech to accomplish a technique called “foveated rendering.” Basically, the headset can tell where you’re looking and will blur everything else in the virtual reality world. As a result, the device can focus all of its processing power on that small area at which you’re looking, which can make the graphics look a lot fancier.

Expect to see this kind of tech more in high-end VR kits down the road.

Last year, Nvidia released its first computer graphics cards capable of introducing ray tracing to home computer gaming. The technology is common when creating CGI for Hollywood movies, but until recently, required long rendering times with huge computer arrays. Now, thanks to re-engineered graphics processors, the tech is starting to trickle into PC games like the first-person shooter, Battlefield V.

The practical difference between ray tracing and typical graphics rendering is obvious when you look at the details in a game. So, things like reflections in pools of water will look more accurate and impressive when you’re using ray tracing. It’s only really relevant for high-end PC gamers at the moment, but Nvidia just announced its RTX 2060 graphics card, which should be more affordable than the flagship 2080, which costs as much as a laptop on its own.

This one typically goes hand-in-hand with wearables. Biometrics is, simply, observing and quantifying characteristics of the human body. For example, the Apple Watch can detect your heartbeat and analyze that data to try and figure out your fitness level. It can also mean using an aspect of your body—your thumbprint or face—to authenticate yourself or unlock something, like your phone; that’s called “biometric security.”

If you want an in-depth look at the different meanings of HDR, you can check out this longer article. For the most part, however, HDR is a TV term that means a television meets a certain set of picture standards, some of which include HDR10, Dolby Vision, and HLG. On a very basic level, HDR speaks to the difference in brightness between the brightest whites and the darkest blacks on the TV.

While HDR sounds like marketing, it’s a feature that will make a tangible difference in your TV watching experience, especially if you watch a lot of new content on the big streaming services, like Hulu and Netflix. Stranger Things, for instance, does a great job capturing the extra image data that comes with a high-dynamic range screen.

Virtual reality in its current form deals mostly with your eyes and ears, but touch will be important to the future of VR. Haptic feedback devices like the Teslasuit for instance, use things like vibrations and pressure to emulate what you would really feel if you were in the virtual environment. Razer announced an entire PC gaming setup (that doesn’t require a VR headset) that syncs up vibrations to the on-screen action in a video game to make the whole experience feel more real. If you saw Ready Play One, the haptic feedback suits were a good example of what might eventually come down the road to help trick our brains into thinking we’re living inside the internet.