The future of VR goes beyond sight and sound. 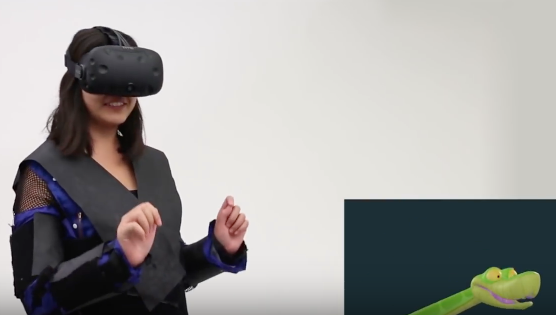 Virtual reality is a gateway to powerful experiences. Strap on a pair of VR goggles, look around, and the scene you see will adjust, in real time, to match your gaze. But the technology is a visual one. Virtual reality doesn’t include touch, although there are controllers that provide “hand presence,” allowing you to manipulate objects in the virtual world, or shoot a simulated gun. So while VR today could simulate a Westworld-like setting, you’re not going to be actually feeling the hug of a cowboy-robot on your body while using any of the major platforms—at least not for a while.

The Force Jacket, a garment from Disney Research, aims to address that gap. Made out of a converted life jacket, the prototype uses embedded airbags that inflate, deflate, or even vibrate to literally give its wearer a feeling of being touched. When coupled with VR software, the setup can simulate something bizarre—a snake slithering on you—or more pedestrian: getting hit by a snowball. In brief, the sensation of touch you feel on your actual body can match what you see in a virtual one. (The device is the result of a research project, so these lifejacket-garments aren’t exactly on sale on Amazon. It’s also not the first research to focus on incorporating haptics into VR.)

“If you’ve experienced virtual reality or augmented reality, it’s largely based in this immersive visual world,” says Alexandra Delazio, the lead researcher on the jacket project and currently a research engineer at the University of Pittsburgh, where she works on technology for people with disabilities. “The real world is not just visual—it’s full of force and pressure-based interaction.” The goal of the jacket is to bring that sense of touch to the virtual world, or maybe even offer a way for someone far away to give you a hug.

The jacket system includes 26 airbags. A connected air compressor and vacuum pump push the air in or suck it out. Sensors between the bags and the person’s body measure the amount of force they’re applying. Creating it required Delazio to be hands-on while making the garment. “I actually personally made sleeves to match the life jacket,” she says. “I feel like I learned so many things from this project, sewing being one of them.”

All of this, plus a computer connection, allowed the team to create what they call “feel effects”—specific sensations that the jacket simulates. Those include the snake slithering experience, and feeling as if your muscles are suddenly getting huge, so you can live out any Hulk fantasies you might have. The most-liked sensation, according to a small group of people who tried it, is called “motorcycle vibration.” Among the other effects the jacket created are called “calm heartbeat,” “adult hug,” and the creepy “bug crawling up arm.” Only the snake, snowball, and steroid-like muscle augmentation were actually paired with a virtual reality experience.

As for that snake sensation? Delazio says that they chose it because “visually, you know how it would look, and you know how it should feel—but it’s something that you don’t get to feel in a normal scenario.” That is, of course, a good thing—and one of the ways that VR can give people new virtual experiences.

Incorporating technology like this into VR “really allows you to cross the last barrier,” says Roberta Klatzky, a professor of psychology at Carnegie Mellon University and one of the coathors on the study describing the jacket. “It’s an extension of VR that’s only possible when you have these kinds of interactions with the haptic system.”

Jeremy Bailenson, a professor of communication at Stanford University and the director of the Virtual Human Interaction Lab, has studied the intersection of touch and VR. “Our research has demonstrated that virtual touch in VR has a similar effect to physical touch in the world,” he notes, via email. “People can recognize emotion through VR haptic devices, and can signal social cues such as mimicry and greetings effectively.” The Force Jacket joins other projects in this field, like the Hardlight suit and the Teslasuit.

To be sure, virtual reality on its own already offers a strong you-are-in-another-world experience, and you don’t need a converted life jacket full of airbags for it to be an effective medium. A VR device can be as simple as a contraption that holds your phone (like Google Cardboard or Samsung Gear VR, in which a smartphone’s screen become the VR display) or a full-blown Oculus Rift or HTC Vive.

But still: Combining VR with touch offers a chance to make experiences more profound, if it’s executed well. So you could both see and feel a snake on you—without interacting with a real serpent.