The S22i Studio Cycle is a big investment, but its iFit integration makes it a complete workout. 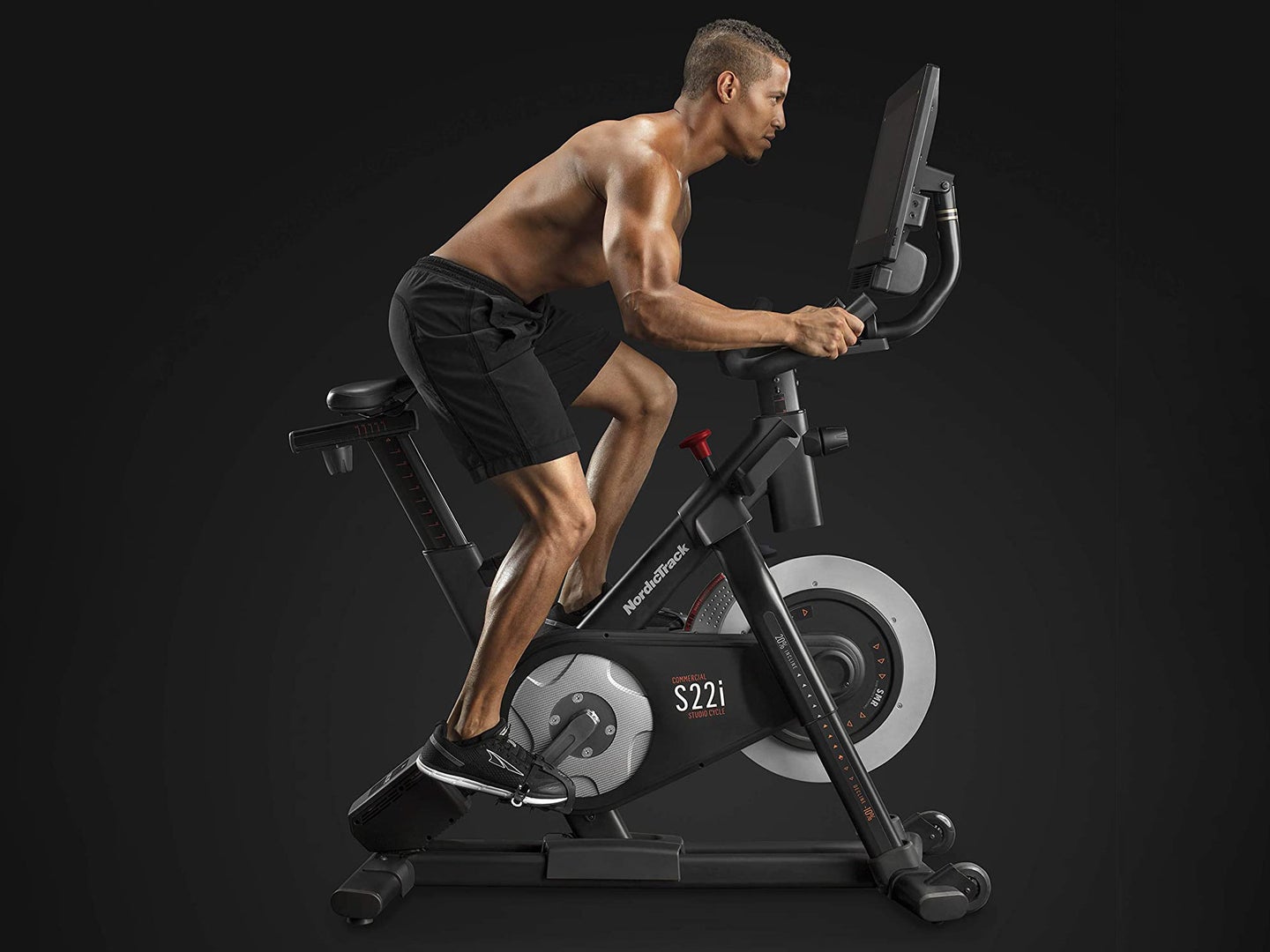 I can assure you that I did not look anything like this while riding the S22i. NordicTrack
SHARE

The pandemic has made going to the gym complicated. Uncertainty about safety regulations and tenuous reopenings have caused at-home exercise equipment to surge in popularity in the U.S., even as we approach the historically calorie-dense holiday season. And while barbells and pull-up bars are fun, they lack the kind of interaction and accountability that in-person exercise classes can provide.

Exercise bikes have shined during this time—they’re less intimidating than something like a rowing machine and take up less space than a treadmill. NordicTrak’s S22i Studio Cycle has a rotating 22-inch LCD display on the front—an increasingly necessary feature for indoor cycles. The screen is meant to show content from the iFit interactive fitness subscription service, which makes the bike one piece of a larger training plan.

I started the testing with an introductory program run by iFit trainer Gideo Akande. I went in skeptical—I never particularly enjoyed the “cheer for everyone” aspects of Crossfit and instead have typically preferred the hoodie-and-headphones approach to working out alone.

As soon as you start the warmup, the bike feels rock solid—after all, it’s built for studios and needs to hold up to multiple sweat sessions per day. It took some time to get the bike exactly configured to my body. My legs are on the shorter side and my arms are extremely long, so I had to make quite a few adjustments before it really felt comfortable. It takes some real force to move the seat post and even more to budge the handlebar unit (which includes the entire monitor setup) even when you loosen the screws. The pieces are clearly marked, however, so you can easily remember your settings once you’ve found them. Once they’re in place, there’s almost no play, so the whole setup doesn’t rattle or click as you workout.

The magnetic resistance system controls how much resistance you’ll feel when pedaling. You can adjust it manually or let the trainer in your group workout control it for you during a ride. Either way, it feels smooth all the way through the curve. It doesn’t have a whoosh of air or a physical damper rubbing on the wheel to make annoying sounds as the pedaling gets tougher. You also don’t get the jerky pedaling action that sometimes comes with adding resistance.

A motorized stand in the back of the bike adjusts the incline or decline, which I didn’t find particularly useful. It also makes a lot of noise during the adjustment. However, it does help with immersion on some rides. It comes with a pair of three-pound dumbbells for the off-bike exercises, which you also may want to replace with something more substantial once you’ve outgrown the light weights.

The seat is a pretty stock bike seat, which feels like it’s built largely for durability and can be uncomfortable when you first start. That’s true for any bike seat, however, if your butt (or as cyclists say, “sit bones”) isn’t used to that kind of pressure. You should consider a good pair of padded bike shorts as an essential accessory if you plan to ride on the regular.

Once you get into the workout, the screen is big enough that it helps you block out whatever’s happening around you. The sound from the speakers is somewhat tinny and awkwardly loud for people in the room who may be facing the back of the screen. But, the touch controls are responsive and the iFit interface is very simple to navigate. You’ll want to take extra care to make sure that you’re logged into your specific profile before you workout, however. I gave my wife some free stats when I did a full workout while still logged in as her.

The iFit workouts aren’t limited to just pedaling. The workout series I chose included segments of pedaling in three different riding positions (sitting, standing tall, and standing leaned over the bars for maximum power). In between cycling intervals, however, I got off the bike to perform movements on a mat or on the floor.

The workouts are as challenging as you want to make them. You can clearly track your stats during your ride or over time, but there isn’t as much of a competitive element as there is with Peloton. Most of the time, I simply ignored the feed of rider stats scrolling in the bottom right portion of the screen. I couldn’t ignore Akande’s voice, though. He’s boisterous and enthusiastic in a way that’s truly contagious. Even in the pre-recorded classes, I didn’t want to let him down by not pedaling at the right speed or phoning it in on my alternating lunges. During the live classes—which iFit is increasing in frequency—the effect multiplied. I didn’t expect it to feel motivating, but it truly did.

When I tried Peloton, the experience felt more concentrated on the competition aspect of the program, which didn’t resonate as much with me. NordicTrack’s bike is a big investment, but it feels more like buying a piece of equipment and access to a program rather than subscribing to the Peloton lifestyle. That’s a plus for me, but it will vary depending on your attitude. They both work, in my experience, but they get there in different ways.

At the end of my first workout, the inside of my living room windows were fogged with sweat.

You don’t have to use the classes if you’d prefer to simply simulate rides. There are other programs that show footage of scenic road bike passages and exciting mountain bike trails. I found myself using those, however, when I didn’t feel like pushing as hard. After a few weeks, I knew that riding with a live coach would push me to work harder.

Ultimately, I was surprised by how effective the S22i was as an overall fitness solution. The mixture of on-and-off bike exercises is satisfying—and tiring—even with minimal other equipment. That’s a good thing because buying into the system isn’t a cheap endeavor. It retails for $1,999 (with $200 delivery), or you can finance it for $57 monthly over the course of 39 months. That includes a year of iFit membership, which otherwise costs $468. Even in the long run, that’s more than you’ll pay for a membership to a discount gym, but still considerably cheaper than signing up for a typical group fitness program like Crossfit.

The iFit programs are surprisingly deep, and your subscription gets you access to all of them. I took a trip and used the app on my phone to do a make-shift version of a workout in a hotel gym on a non-smart bike. It mostly worked, but the overall experience is very different. The bike didn’t automatically adjust the resistance for me during the ride and the small screen is hard to focus on.

Ultimately, the bike is super high-quality and feels like it will last forever, but what you’re really buying into is the opportunity for motivation. Tracking stats through the app and on the bike itself helps form the habit. Getting into a routine with specific trainers instills a form of accountability. If you’re the type of person who posts aggressive fitness memes about “just getting in there and doing it,” this likely won’t scratch the itch. But, if you can afford the cost, the added interactive elements will likely show even better results than a simple membership at a big-box gym.