The scoop on your scaffolding. 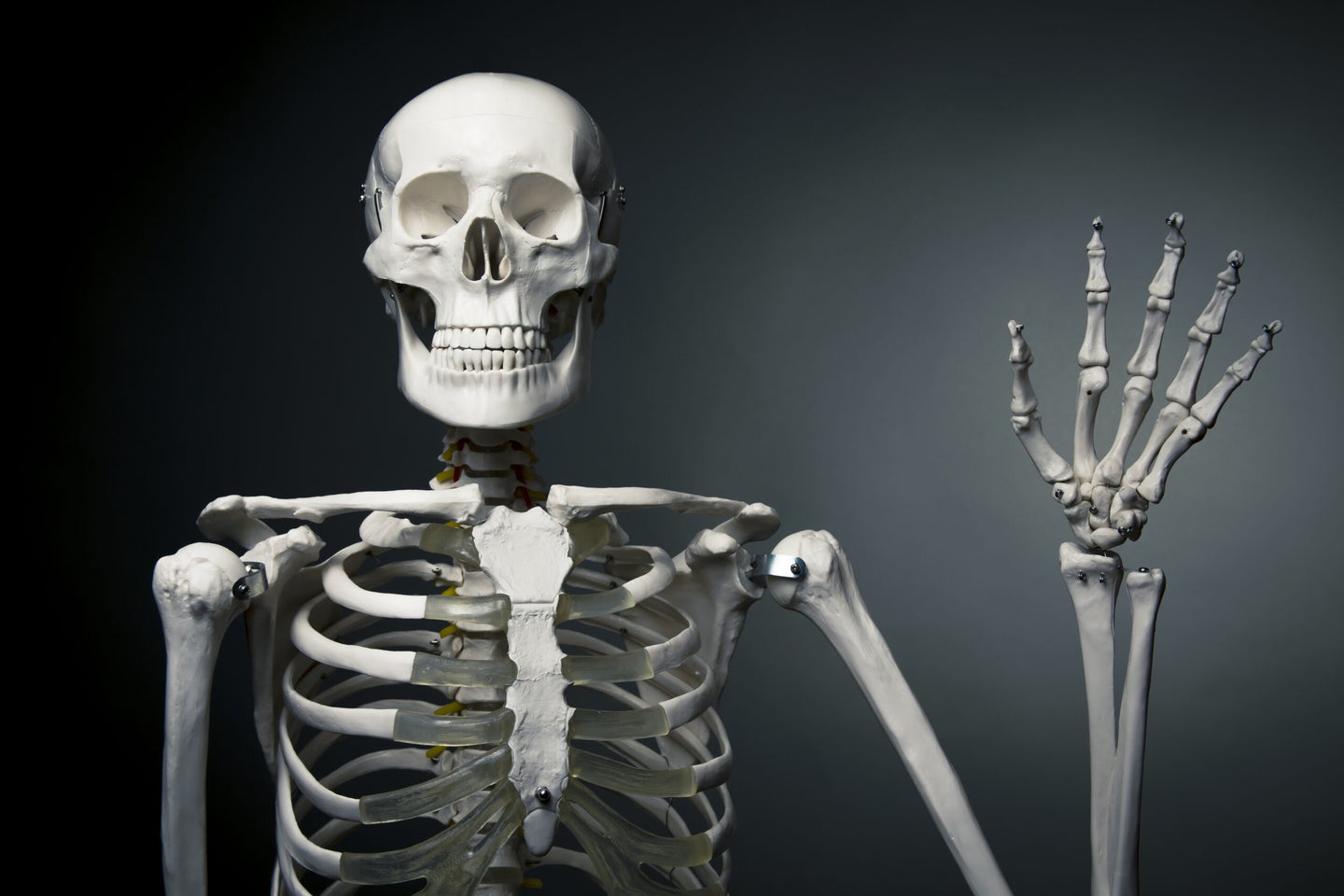 From your femur to your stapes, your bones help you maintain your signature human shape; without them, you’d just be a pile of mush. But the skeleton isn’t just a lifeless scaffolding for the rest of your flesh. Erin Waxenbaum, an assistant professor of anthropology at Northwestern University who has studied human osteology for more than a decade, says that while people tend to think of their bones as static, they’re actually changing and evolving constantly, even before we’re born. Here are some crazy but important facts you might not know about your bones to make you appreciate each one, no matter how big or small.

Babies have more bones than adults.

In science class, you probably learned that the human skeletal system contains 206 bones—but that’s only after it’s done growing. We start our lives with much more osseous matter than we end them with.

“A gross majority of the bones in our body don’t look the way they do in adulthood as [they do in] a child or a newborn,” Waxenbaum says.

Newborns can have more than 300 distinct bones. But the extra ones don’t disappear or dissolve to bring that number down to 206; instead, they fuse together as they develop. Until that merging happens, some of these bones don’t yet contain the mixture of mostly collagen and calcium we think of as standard “bone” material. Instead, they start as tough yet flexible cartilage, which allows a fetus to stay curled up in utero and squeeze through the birth canal during labor without hurting itself. But once a baby takes its first breaths, its bone-forming cells are hard at work to ossify that cartilage—or turn it into sturdier bone—and join all the pieces together.

Take the humerus, the upper arm bone: It starts as three or four separate pieces of cartilage. After birth, the cartilage that makes up each piece begins to transform, individually, into bone. After about three years, the pieces then meet and continue to fuse together. They keep melding until around the start of puberty when the upper arm finally has its own bona fide bone.

Or consider the skull, which starts as 44 separate elements. Pieces at the top of the cranium are held together by six different areas of tissue called fontanelles, or the soft spots on a baby’s head. Bone replaces the fontanelles during the baby’s first year or so, making the skull one of the earliest bone areas to fully come together (of course, to protect the brain at all costs).

Waxenbaum says most people’s bones have finished fusing together around the start of puberty, though a few stragglers, like the collarbone, don’t fully form until our early to mid twenties. The 206 count doesn’t include 32 teeth, which aren’t considered bones because they’re made of enamel, a material even stronger than bone.

Some people have extra bones.

Waxenbaum says the 206 number isn’t true for everyone—some folks may have bones that don’t fuse together or just plain extra ones. Around 10 percent of adults have an extra vertebra in their lower spine, an anomaly often only discovered through an x-ray or MRI and which usually causes no discomfort.

Equally harmless, pebble-like accessory bones can occasionally pop up around the wrist, hand, ankle, foot, or neck. These sesamoid bones are embedded within tendons. While some owe their existence to genetic factors, others form around joint areas that experience frequent strain. Here, they can help relieve pressure and friction or even slightly redirect the direction of muscle movement. Though there’s one type of sesamoid bone that almost everyone has: the kneecap.

One type of extra bone can be a nuisance: A surprising number of people have cervical ribs, which grow slightly above the collarbone. While most are unproblematic, some can lead to thoracic outlet syndrome, which is when the bone presses on nerves in the neck and causes pain, numbness, and blood clots.

Certain areas of the body contain a higher concentration of bones than other areas.

The skull may seem like one continuous segment, but it’s actually made up of more than 20 different bits. Hands and feet, each of which are made up of nearly 30 separate bones, contain over half the body’s 206 bones.

Sure, their dependence on muscles for movement means that a walking skeleton is just a spooky fantasy. But bones aren’t just static masses of calcium and protein—they’re active construction sites, and cells are doing round-the-clock work on them.

As you age and do normal, human things, you inflict stress on your bones, causing bone material to slowly deteriorate over time. So, your body frequently replaces the old stuff through a process called bone remodeling. Osteocytes control the operation, sending signals to two types of cells that do the heavy lifting. Osteoclasts use enzymes to break down the old tissue and send its salvageable components back into the bloodstream through a process called resorption. Then, they call in osteoblasts, which deposit fresh tissue to keep things ship shape. Waxenbaum says these cells have a turnover rate of 4 to 5 months—that means your skeleton is constantly changing.

During development, osteoblasts are more active because they’re mainly focused on building new bone rather than replacing it. But during adulthood, the two cells work in tandem. The more stress you put on your bones (including through exercising), the more often your osteocytes jumpstart the bone modeling process—and the stronger your bones stay.

“Bone is very active living tissue that needs to be used to be maintained,” Waxenbaum says.

Most bones are equal opportunity breakers.

While it may seem worse to break, say, your clavicle than your arm, Waxenbaum points out that the time both parts take to heal is pretty similar. How long a typical fracture recovers can vary by individual, but the average is 6 to 8 weeks—within the same body, that recovery time is usually applicable no matter which bone is affected.

However, Waxenbaum says bones in the lower body, particularly the legs and feet, may take slightly longer to heal than those in the upper body. That’s mainly because those bones bear more weight (and therefore stress) and are more difficult to immobilize, making it trickier to recover from a break.

Once you fracture a bone, Waxenbaum says you’re neither more nor less likely to break it again. While the healing process results in a slight, permanent bump around the area that experienced the fracture, it doesn’t provide any protection against future breaks—those are more dependent on your behavior.