Get that albedo going. 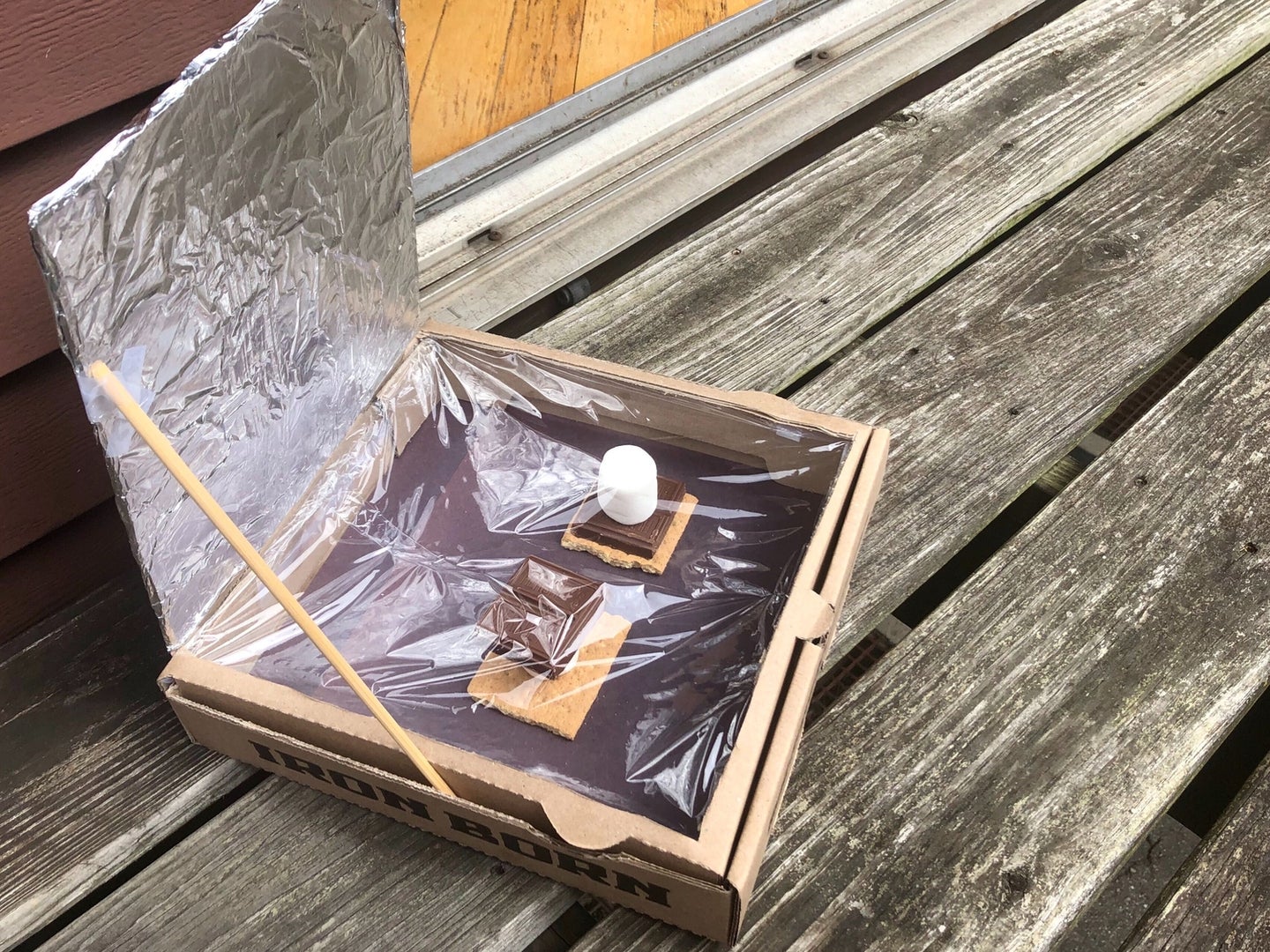 The sun (even if it might be a little lazy), gives us free heat and light every day. It gives us and our planet life, but more importantly, it can also make s’mores. You don’t need fancy solar panels, either—just an old box, some foil, and some plastic.

1. Cut open the top of your box. This step requires an adult. Close the pizza box’s lid and cut along the three sides without the hinge. Stay at least 1 inch away from the edges at all times. You’re making a door inside the original lid.

2. Put black paper on the bottom of the box. You can use tape, glue, or no adhesives at all—ours fit nicely on its own. The only thing that matters here is that the paper lays flat and covers the whole surface.

3. Cover the oven door with aluminum foil. Leaving the original lid closed, open the door you cut in Step 1. Cover its inside face entirely with foil and tape it in place.

4. Add plastic wrap. Open the original lid, taking care not to tear the thin border of cardboard that remains. Stretch plastic wrap over the empty space and secure it with tape.

5. Set up your s’mores. There are many ways to construct these classic treats, but here’s a setup that works well in a solar oven: a graham cracker base, marshmallow in the middle, and chocolate on top. The marshmallow may not change much in the oven, so capping your confection with chocolate ensures it will cover both the ‘mallow and cracker as it melts. Put your s’mores inside the oven, on top of the black paper.

6. Put your oven in the sun. Find a nice, sunny spot, and place your s’mores-filled oven there. Make sure the foil-covered door is angled to reflect sunlight into the cooking area. If it keeps falling closed, you can tape a wooden stick or anything similar to it and the body of the box to hold it in place.

7. Wait. Depending on how hot it is, baking could take up to an hour. We made our s’mores on a sunny day where temperatures were between 70 and 75 degrees Fahrenheit and the chocolate melted well, but the marshmallows were barely affected.

You just captured some of the sun’s energy in a box. That’s pretty cool. But what’s even more cool is exactly how you used a bunch of garbage to trap light that traveled nearly 94 million miles across the cosmos.

When sunlight hits the foil on your oven’s door, it’s reflected down toward the s’mores in the box. To get there, it has to pass through the plastic. Once through the plastic, though, it strikes the black paper, which absorbs it. Black paper has low albedo, which means it absorbs much more solar radiation than it reflects. White paper, on the other hand, has higher albedo.

Up until it struck the dark bottom of your oven, the sunlight was visible light. That type of light can easily pass through plastic. But after it was absorbed by the black paper, it radiated back out as infrared light, which can’t get through the plastic wrap. Trapped, the light eventually becomes thermal energy, heating up the inside of your solar oven, Jones says.

When it comes to actually making the s’mores, you’re going to get relatively low baking temperatures. Chocolate melts at somewhere between 86 and 90 degrees, and on a hot day, a DIY solar oven will easily reach those temperatures. But marshmallows are a bit sturdier, and you likely won’t see them change much.

You definitely won’t see them turn the glorious, crispy brown you’re used to if you’ve made s’mores over an open fire. For that kind of caramelization to happen, you’d need temperatures of hundreds of degrees, says Pat Polowsky, a food scientist. At that point, he says, you’d be better tossing your pizza box on a fire and making s’mores the old-fashioned way.