A beginner’s guide to catching trout—even in autumn

Hit the river in the fall for what can be some of the best fishing all year. 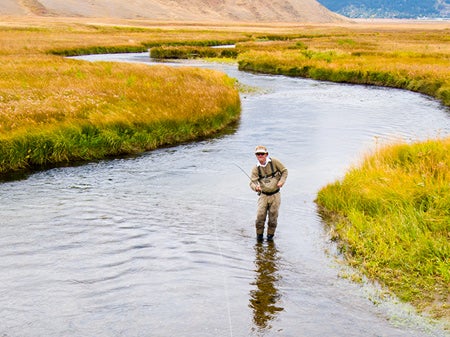 As the leaves change, fishing strategies do too. Brian Grossenbacher
SHARE

Pride, as the preacher says, goeth before the fall. I’ve seen it in others and it’s happened to me—after a summer spent dialing in the trout streams, you know what you’re about. Life is good. Then the maple leaves turn, the bluebird days give way to freakish weather swings, and your fishing, like the geese, heads south. Autumn trout streams still offer opportunity, but fall is a season of change. And if you want to catch fish, you have to change with it. Here’s what to expect on fall trout water, along with strategies to meet the season.

Fishing in freestone streams and headwaters

On these higher-gradient, boulder-strewn waters, the trout are concentrated into fewer spots by a flow volume at or near the annual minimum and warm, clear water that’s low in dissolved oxygen. On summer-like days, head straight to the pockets. The turbulence produced by in-stream boulders gives the trout fresh air in the water. Fish the froth with a high-­floating, buggy dry fly: a size 14 or 16 deer hair caddis or small stimulator. Approach the water directly downstream and use short, precise drifts to cover the riffled apron of water behind the boulders, as well as the bubble lines and the foamy water alongside chutes.

When autumn days feel more like winter, go subsurface. Hare’s ears, pheasant tails, princes, beadhead or weighted, do well. In the shrunken currents of fall, fishing without a strike indicator gives more precise control in the narrow drift lanes. But this requires that you get close to the fish. Look for pocket-water seams, slots, and current tongues that run knee-deep or better. The surface chop will help mask your approach, but keep low, move slowly, and use the cover of boulders and brush for concealment.

Rig a pair of nymphs about 8 to 12 inches apart and position yourself about a rod’s length across from the target water and slightly downstream. Flip the flies upstream at a 45-degree angle, and raise the rod to remove any slack. With the rod tip high, lead the flies downstream on a barely taut line. Focus on the leader where it enters the water; if it pauses or twitches, strike instantly. If you have time to think, “Was that a hit?”—it’s already too late.

The bigger pools that paid off earlier in the year can still be good bets, but years ago on an autumn trip, an expert fly angler gave me a bit of advice: Instead of concentrating on the head and gut of the pool—prime summer water—look to the edges and tailouts. Aquatic forage is skimpy in fall, and the trout rely more on terrestrial insects that fall to the water from surrounding vegetation. Fish will feed along shady banks or take up stations at the tail, where the narrowing current funnels food to them. A flying ant or beetle imitation is a good choice, but on these smooth, clear waters, stealth means more than pattern.

Prespawn brook trout will congregate in these same tailouts and attack a streamer swung down and across in front of them. In this shallow water, you’re best off with an unweighted feather-wing or bucktail pattern like a Hornberg or black nose dace.

Here, the prevailing fact of fall is vegetation, lots of it, in the water and on the bank. After a summer’s worth of growth, beds of aquatic plants spread in thick mats on the surface. Fish holding alongside or between islands of weeds or in shallow channels through the salad are supernaturally wary. Avoid wading if at all possible and stalk from the bank. Crouch. Creep. Crawl. Slither on your belly like a reptile. Do whatever it takes to get directly across from, or slightly below, the fish. Cast from a kneeling or sitting position.

Long, drag-free drifts are neither feasible nor necessary over shallow-lying fish holding around the weeds. A trout sees the surface of the water in a circular window centered above its head; the radius of the circle is roughly equal to the depth of the fish. A trout holding a foot down won’t see your dry fly until it’s 12 inches away. Drop the fly at the upstream edge of this window, laying your line directly atop any intervening vegetation. Let the fly float past the downstream edge of the window before picking it up—very quietly. If a hatch is in progress, it’s likely blue-winged olives. Fish a size 18 parachute BWO or emerger pattern. When nothing’s hatching, choose a parachute Adams or Crowe beetle in the same size; small hook gaps are less likely to snag on vegetation when you pick up the fly for another cast.

Bankside weeds and grasses have also reached their maximum height and droop over the bank low to the water, forming arch-like tunnels that give trout shade and cover. To fish these prime runs, look for an entrance to the tunnel. Stay as far downstream from the opening as you can while still being able to pinpoint it with a cast. Drop a size 14 elk hair caddis or ant pattern a few inches from the bank, and let it snake down the tunnel. Your view may be screened, so strike at any disturbance.

If the overhanging vegetation is mostly long strands of grasses, you can take a brute-force approach: Use a pattern that is compact and bullet-like—a Dave’s hopper is good. Cast a tight loop to drive the fly through a thin spot in the curtain of grass. You may snag up a few times, but this tasty water is worth the trouble.

Fall is terrestrial time on spring creeks, and the bugs are most active on warm, sunny days. Wherever you find open water or unobstructed banks that allow for a longer drift, flying-ant, beetle, and hopper patterns make excellent prospectors.

On moderate-gradient rivers, fall brings fewer hatches and smaller flies, mainly blue-winged olives and midges. These insects demand small imitations, from size 18 down into the 20s, as far as you have the courage and eyesight to go. You’ll need 6X to 8X tippet, and on glassy water with spooky fish, leaders of 12 feet or longer.

Trout won’t move far for tiny bugs; you must place your fly precisely in the feeding lane, a move best made with a downstream presentation. Station yourself upstream and slightly to one side of a rising fish. Aim for a spot about 3 feet above the fish and 3 feet beyond the far side of its feeding lane. Stop the rod tip high on the forward delivery so the line falls to the water with some slack. Immediately lift the rod and skate the fly toward you, directly into the drift line. Then drop the rod tip to give slack and float your fly right down the pipe.

Always check out bankside eddies, especially after a hatch. Drifting insects collect in these backwaters and circulate on conveyer-belt currents past hungry mouths—like you see in some sushi bars. Look closely for trout snouts dimpling the surface film. Don’t let the tiny rise forms fool you. As a friend of mine likes to say, “Fat men can be graceful dancers.”

On many autumn rivers, brown trout moving upstream to spawn offer a shot at your best catch of the year, provided you change tactics. These fish must be provoked into striking, and it’s hard to pick a fight with a fly the size of an eyelash. You’ve got to invade their personal space, and nothing serves like a streamer. The key is to keep moving and cover some real estate.

Migrating browns stick primarily to the main channel, intermittently holding up in the slow current behind submerged obstructions and along deeper or rocky banks. Holding fish are scattered, and you can search the most water by casting upstream, parallel to the shoreline. Drop a streamer a few inches from the bank. Alternate dead-drifting the fly with twitches imparted by the rod tip, stripping in line to control the slack. Make five or six casts and move on. Browns in the channel are traveling upriver, and the best way to intercept them is by working downstream, swinging a streamer. Begin at the head of a deeper run, off to one side of the channel. Cast across the current, and take an upstream mend to let the fly sink. Let your streamer swing on a tight line, following it with the rod tip until it’s directly below you. Take a couple of steps downstream and cast again, continuing through the run.

Bigger rivers hold the potential for double-digit fish (as in pounds, not inches), so don’t go lighter than 1X tippet. In fall, you’ll want every edge you can get.