Ten weeds you can eat

Your backyard could be loaded with edibles. 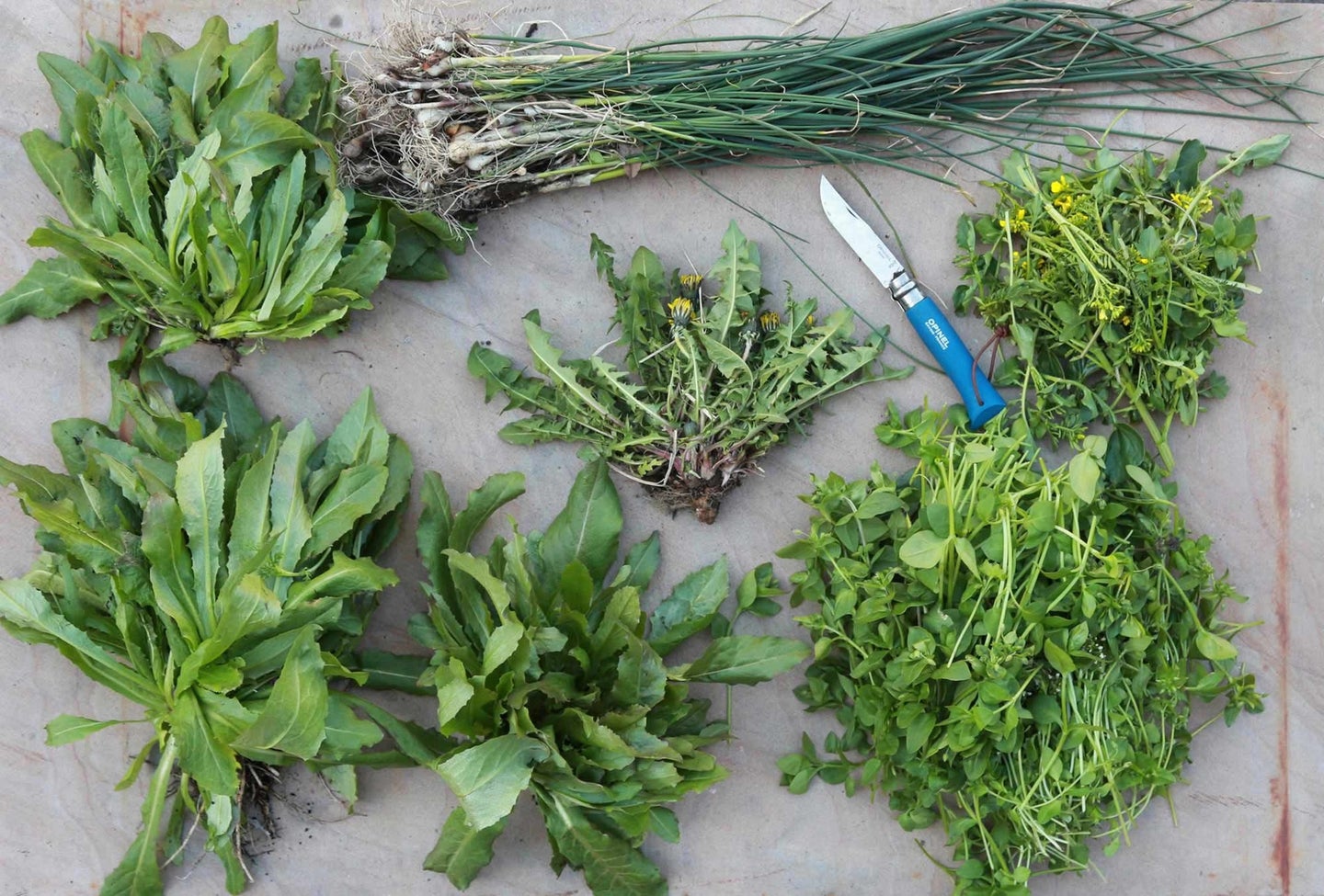 If any of these weeds are proving a nuisance in your farm or garden, the solution might just be simpler than you think. Marie Viljoen
SHARE

There was a time when the only place you might encounter a thicket of invasive Japanese knotweed or a tangle of pokeweed was while bushwacking in the urban or rural wilds. While most weeds will be left to languish in the wilderness, there is a growing awareness that many of these unruly plants—usually a blight to farmers and home gardeners—have something in common: They can be quite good to eat. This spring, bundles of tender, young knotweed and pokeweed shoots will be appearing tentatively at greenmarkets. Along with wild cresses, aggressive onions, rampant mugwort, and habitat-altering autumn berries, they represent a steadily rising tide of edibles-formerly-known-as-weeds becoming available to cooks.

Thanks to foragers, attendant trending hashtags like #wildfoodlove, and the emerging practice of what I call conservation foraging (focusing on sustainable harvest practices and the collection of invasive species), many weeds that landowners battle on their lawns are the same ingredients appearing on restaurant menus, in Community Supported Agriculture (CSA) boxes, and at the market.

As the audience for culinary weeds grows, farmers are poised to take advantage of this potential income. But little information is yet available on how weeds function as marketable crops. One farmer-forager recognizing this gap in knowledge is Russian-born Tusha Yakovleva, who lives in the Hudson River Valley. Her guide for farmers, Edible Weeds from Farm to Market, is funded by the Sustainable Agriculture and Research program. Its aim is to educate and empower farmers who wish to add invasive edibles to their harvest lists. My own book, Forage, Harvest, Feast: A Wild-Inspired Cuisine (Chelsea Green), caters to the receiving end of the wild supply chain—the curious cook and chef—by providing hundreds of recipes for preparing weeds and wild plants at home.

But for now, here is a list of 10 choice edible weeds appearing in greenmarkets, with a rundown of what to expect from them.

Editor’s note: This story is intended merely to show you a selection of edible weeds; we don’t recommend you go outside and start tossing foraged greens into a salad bowl. Some of these may resemble other plants that are poisonous to humans, so if you’re not absolutely sure what kind of plant you’re looking at, leave it alone.

Farmer Faith Gilbert, of Letterbox Farm, includes the sour crimson fruits of autumn olive (also called autumn berries), in early autumn CSA boxes in Hudson, New York. They are as tart as red currants and can be used in similar ways. Their high lycopene content can cause jams to separate, but their color and flavor invigorate sweet and savory sauces and fruit leathers.

Peeled burdock stems are crisp and versatile. “Everyone loves them as soon as they try them,” says Avery McGuire, of Thalli Foods near Ithaca, New York, who began selling the late-spring stems to chefs and farmers-market shoppers after reading Samuel Thayer’s Forager’s Harvest. She suggests dipping them into hummus, or braising them. Burdock’s cold-season taproot (better known as gobo) is a substantial, starchy vegetable that takes well to slow, moist cooking.

With its appealing flavor of nutty corn silk, spring chickweed is a delicacy best appreciated raw. Its tender stems, leaves, and flowers are ideal fillers for summer rolls and a gentle bed for seared seafood.

Familiar dandelions are the gateway plant to eating weeds. “I may be the only person who gets excited about dandelions in my hayfield,” says Mary Carpenter of Violet Hill Farm, near Albany, New York, who sells them in New York City’s Union Square. With crisp rosettes in late winter, mild leaves and succulent stalks in spring, and assertive flavor in summer, dandelions’ evolving profile makes them appealing throughout their growing season.

Prolific field garlic (also called lawn chives, or wild garlic) is sold in neat bunches at New York City greenmarkets by New Jersey–based Lani’s Farm, an outfit known for offering flavorful weeds in pristine condition. The little wild onions fetch $3 a bunch. If you have ever foraged and cleaned field garlic you will appreciate the bargain. The bulbs and leaves are a sustainable—if diminutive—alternative to vulnerable native ramps (Allium tricoccum).

Spreading thousands of seeds after flowering, biennial garlic mustard inspires ecological ire. Edible in its entirety, the plant offers second-year roots tasting like horseradish (in contorted miniature), leaves that are a gustatory marriage of broccoli rabe, mustard, and garlic, and budding stems in late spring that are an ephemeral delicacy. “The biggest issue is the short window of readiness,” says Mary Carpenter: Garlic mustard’s bud season is brief, and customer education takes time. Be ready.

Also offered by Violet Hill Farm, Japanese knotweed is notoriously invasive, but also delicious. It will definitely become more familiar as a market vegetable in years to come. Its mid-spring shoots resemble asparagus, but taste and behave like an earthier, more vegetal version of rhubarb crossed with fresh sorrel. Use it raw or cooked, especially in savory dishes that need a sour boost.

Mugwort’s feathery leaves are packed with a sage-like fragrance that is wildly versatile in the kitchen. Author and wild foods purveyor Tama Matsuoka Wong says they are “awesome as tempura.” She supplies mugwort and other edible invasives to Fresh Direct, under the name Meadows and More. From its first shoots through to its winter stalks (which can be used as kebab skewers), this under-appreciated herb is about to experience a slow-burn renaissance.

Known as poke sallet in the South, this indigenous but prolific plant was originally eaten by Native Americans. It is a succulent spring vegetable when blanched in ample boiling water, but it must never be eaten raw. Pokeweed’s notoriety stems from livestock poisonings or improper preparation: Animals that graze on the mature plant or snout out its toxic rhizome can grow sick and die; unripe fruit and uncooked green parts are also toxic to humans. But once blanched, young poke shoots are delectable.