The best brews are all around you. 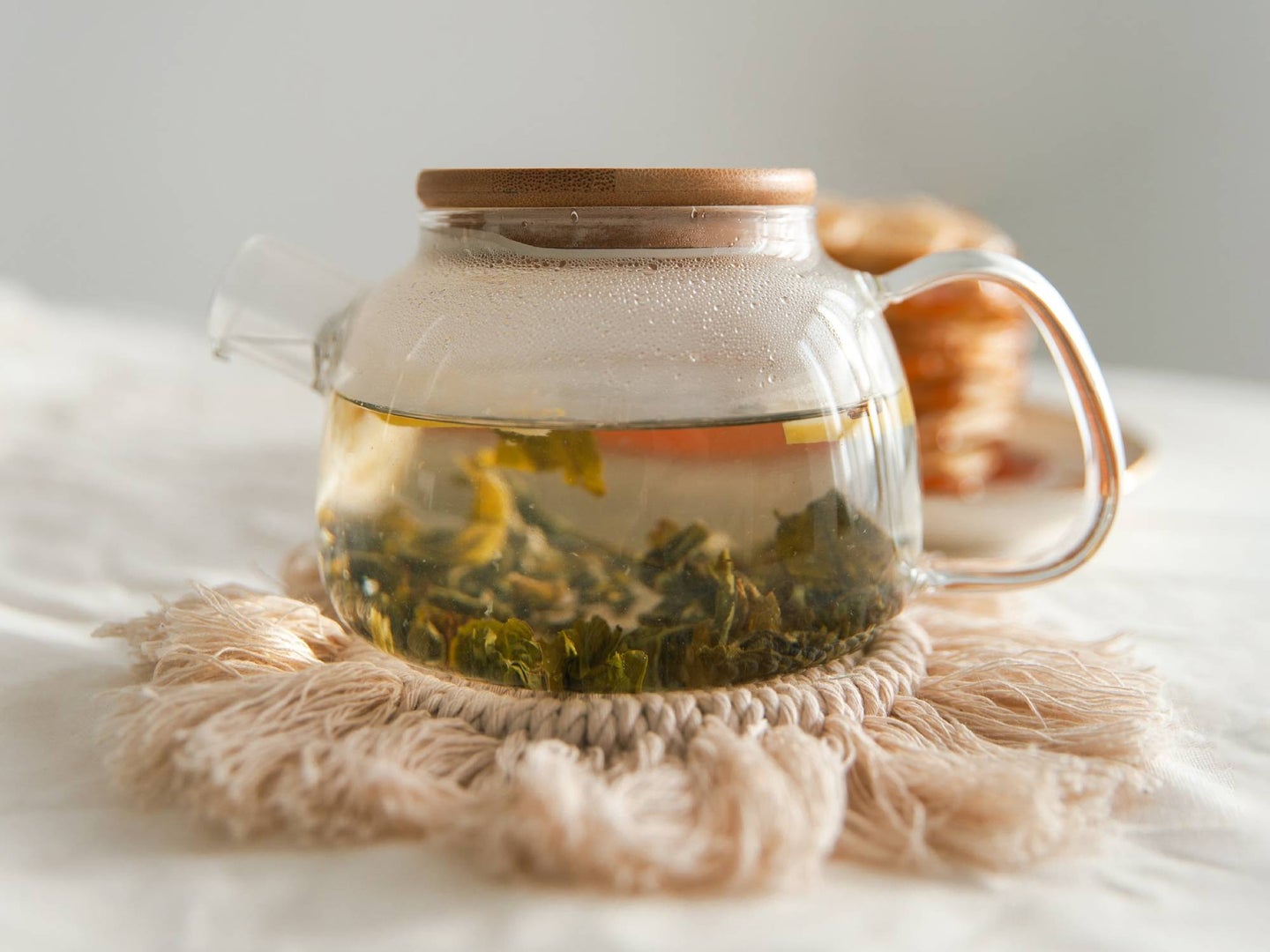 Cozyness may be growing right outside your door. Tamara Schipchinskaya / Unsplash
SHARE

There’s something delightfully fulfilling about taking a stroll down the block, or in your own backyard and kneeling not just to smell the wildflowers or appreciate a butterfly, but to pick yourself a snack or something to make a refreshing beverage.

Because no matter where you live, there’s likely an abundance of plants suitable for human consumption around you that you’ve been missing out on. From flavorful mallow to ubiquitous dandelion, a lot of this flora is considered weed but offer plenty in the nutrition and flavor department.

But beware, because not all sites are free for plucking, and not everything that grows is safe to consume. Fortunately, there are several plants that are fairly easy to identify, and also make a tasty–and healthy–tea.

A warning before going on a foraging adventure

Before you go out foraging for a refreshing quaff, be aware of the risks. Many plants are more than just inedible—they’re poisonous, warns Philip Stark, forager, an affiliate faculty member at UC Berkeley’s Berkeley Food Institute, and founder of Berkeley Open Food Source. Other plants, like black nightshade, may feature both edible and toxic parts, while others, like acorns, are only digestible after extensive processing.

[Related: How to forage your way through your neighborhood]

This is why it’s important to take extra care and learn how to identify plants using multiple descriptions and sources before imbibing. Learning to spot a species in multiple ways and knowing its flowers, leaves, and stalks can be really helpful, as it’s getting expert guidance through a foraging course or tour. When you go on a foraging walk, make sure to bring books and any visual aid that will prevent you from confusing one plant for another.

Then, when you think you’ve found an edible plant, stop for a second and reassess—does it actually look like the picture?

“It’s easy to get carried away with your own enthusiasm, [but] resist the temptation to make the plant look like the description,” Stark says. Sometimes, it’s just not the same plant you see in your book or foraging app, even if you want it to be.

Finally, even if you’re certain you’ve correctly identified a plant, rule out any allergies or unwanted effects by eating or drinking just a few bites or sips the first time around. If nothing goes awry in the following eight hours, you’re in the clear.

Forage your own tea

If you’ve got your foraging guide and tools, you’re ready to head out and pick your own plants for tea. Here are a few tasty and easy-to-spot options you can usually find across the U.S.

Most people are familiar with this weed with spiky green leaves and bright yellow flowers that suburban homeowners spend their summers trying to eradicate. But instead of treating your yard with chemical pesticides, consider brewing your dandelions.

Every part of this plant is edible, including roots, stems, leaves, and flowers. Pluck out as much of it as you like, rinse, and steep in near-boiling water for five minutes. You can leave it for longer if you prefer a strong flavor, or make extra and refrigerate for a refreshing iced tea.

Roasted dandelion tea is a well-known caffeine-free coffee alternative as it has a similar earthy flavor, but fresh leaves and flowers make for a lighter, sweeter profile. It may also be beneficial in helping prevent UTIs (when combined with uva ursi) and boost liver health.

This non-native species thrives all over the country in the most hostile environments and it will even sprout out of asphalt. It’s not only delicious but may help you relax before bedtime and work as a digestive aid.

Look for cone-shaped, yellow-green flower heads with no petals and small fern-like leaves. This plant smells like chamomile with a slight pineapple undertone.

To make tea, use only fresh or dried flowers (don’t use leaves, roots, or stems), and steep in hot water for five to ten minutes. As for the flavor profile, Stark describes it as a “supercharged chamomile.” It’s one of his favorite plants to forage for tea.

Pine needles are available year-round in most parts of the country. But note that not all pine trees produce edible needles, so until you are able to confidently tell the difference between trees, make your life easier by sticking to white pine.

You can identify these long, soft needles by how they grow off the branch: in clusters of five. Chop them up into inch-long pieces or so, and pour nearly boiling water over them. Let them steep for 10 to 15 minutes, and enjoy.

The tea tastes woodsy with some citrus notes, similar to how a pine forest or your Christmas tree smells. Bonus: it contains lots of vitamin C.

This tea is like a science fair project in a cup. The tea made from mallow flowers is a lovely blue, but it turns pink when you change the tea’s pH by adding lemon juice or other acids. It’s a popular infusion around the world and is often used medicinally for everything from coughing to stomach pain. You can buy it in bulk at specialty retailers, but it’s more fun if you forage it yourself.

Collect the flowers to make tea—They’re pink or purple, small, five-petaled, and grow out of bushy plants that have large leaves that resemble ivy. Dry the flowers and steep them for at least five minutes in hot water. Strain, then add a squeeze of fresh lemon juice to watch the color change from blue to pink.

The tea has a mild, floral flavor and makes a refreshing iced tea, too.

Food (and drink) is all around us, so it’s a good idea to start your foraging journey by learning to identify one plant at a time and grow your list from there.

“It’s surprising how few plants you need to learn to put something on the table every day,” Stark says.

But knowing to tell plant species from one another is just the start—It’s equally important to be aware of where you’re doing the collecting. Studies show that chemicals and heavy metals from soil can be present in some wild edibles, so just like you would grocery store produce, always rinse plants before chowing down.

[Related: A beginner’s guide to finding wild edible plants that won’t kill you]

Stark also recommends avoiding plants that are growing from asphalt, or from places where there’s a lot of trash or debris, like near a demolition or construction zone. Also avoid foraging near old buildings that might have had lead paint or lead pipes, and other locations where there may be far more toxins or chemicals in the soil than normal. These include gas stations, landfills, shipyards, or railroad tracks, for example.

Otherwise, as long as you’re not breaking any local laws, feel free to forage along cement sidewalks, in parks where this practice is allowed, or along trails. When you do, enjoy knowing that, as Stark says, wherever you go in the world, there are friends waiting to feed you.

“It feels very human to walk through our environment noticing resources,” Stark says. “It’s a very different way of experiencing the world.”