The bling of the future is controlled with a swipe 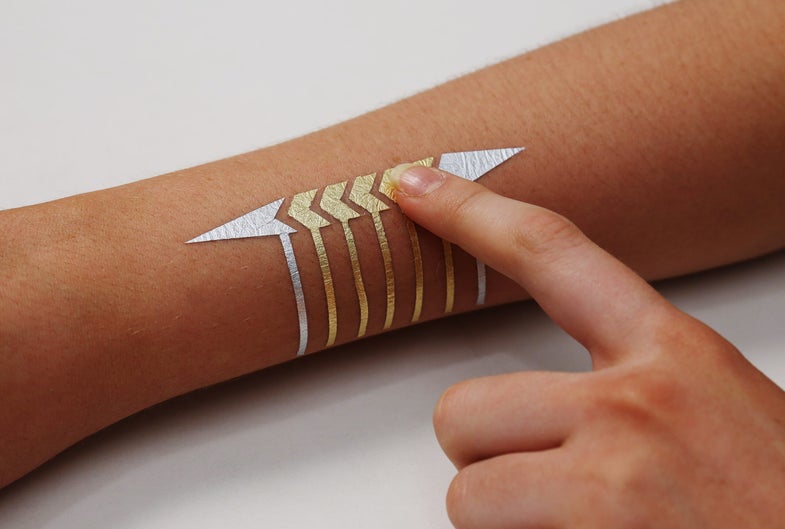 Soon, every concert, street performance, and crowded beach might have crowds of people adorned with tiny glowing lights inside of a temporary tattoo, which throbs along to music or heart rate. An invention by researchers at the MIT Media Lab, DuoSkin is a customizable wearable that flaunts the wearer’s personality through programmable thermochromic pigments that change color when they’re heated.

“We wanted to move away from all-in-one wearable devices with this project, and we were really interested in pieces that didn’t need to last forever or could be changed from day to day,” says principal research designer at Microsoft Asta Roseway, who worked with the Media Lab on the project with student Cindy Hsin-Liu Kao.

The customizable tattoo is made of layered adhesive, gold leaf, thermochromic pigment, and a silicone interface.

“I like to call it ‘hybrid body crafting,’ says Hsin-Liu Kao, who mentioned the inspiration for these wearables comes from recently popular stick-on body jewelry. “We wanted to build an output display that allowed for a more aesthetically pleasing look—we wanted them to look like body art. The pigments are slower than typical displays, but they have an ink-like effect and are much more textured.”

Roseway and Hsin-Liu Kao use gold leaf as the conductive material and resistive heating element underneath the thermochromic layer. When the gold layer is attached to a small battery, it heats up, and allows the pigment layer to change color. In order to control the content displayed, the researchers developed their own smartphone app—so that a wearer could update their “skin status”—and then used the NFC technology within Windows and Android phones to communicate with the tattoo. (Roseway says the tattoo can work with any NFC application, though.) They also used an Arduino mini as a microcontroller hidden underneath the wearer’s sleeve that processes the sensor data. The wearer can touch the tattoo like a button to change songs or colors. It can take around 30 seconds for an image to fully display, and then another 50 seconds for the pigment to revert back to its original color.

The great part of these tattoos is that they’re able to sustain some exposure to water, like normal temporary tattoos, and can last up to a day or two without peeling off. The not-so-great part is that the gold leaf has to be cut no thinner than two millimeters, because it’s a fragile material. An electronic cutter is needed to accurately cut the design, and designs will have to be thought through so that the heated circuitry would be distributed evenly across the thermochromic layer.

“We built a platform that is more culture-driven instead of hardcore tech. We want to enable others to build this technology themselves,” says Hsin-Liu Kao. “It’s very cheap technology and everything we used was open-source—we hope it will be an accessible wearable that anyone can call their own.”