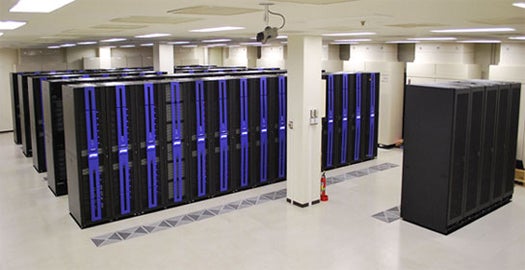 In an effort to test the awesome power of their new super computer, a team of scientists at University of Tsukuba, Japan, have calculated Pi out to 2.5 trillion decimal places, more than doubling the previous record.

The computer, the T2K Tsukuba System, used 640 Quad-core AMD Opteron processors, speeding along at 95 teraflops, to perform the calculation. With that huge amount of processing power, the computer finished the calculation in only 73 hours. By comparison, the previous record holder took around 600 hours to calculate half as many digits. And just to make sure that they didn’t make any mistakes, the scientists ran the calculation twice.

Calculating pi to that precise of a measurement doesn’t have any practical applications (other than proving how bad ass the T2K computer is), but fulfills an ongoing mathematical project of exploring the nuance of this endless, but important, geometric constant. Additionally, if you’re into Piphilology, the art of memorizing the numbers in pi, this gives you a new goal to shoot for.