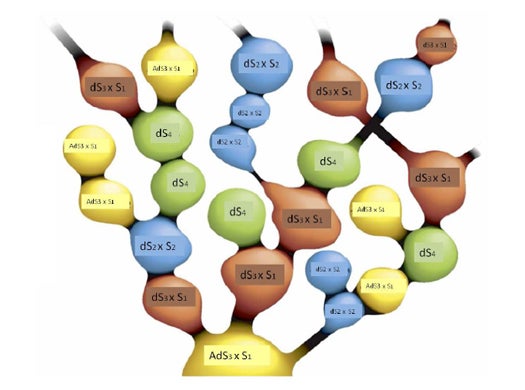 Man-made metamaterials could theoretically bend light to create invisibility cloaks, or alter electromagnetic waves in ways nature never intended. Now, a researcher at the University of Maryland in College Park thinks they could do much more than that, becoming man-made analogies to various cosmological theories of how the Universe works and helping researchers explain certain aspects of those universes.

These other dimensions are quite different, and the laws of physics there could be completely different as well, dictated by the particular way they are compactified, etc.

Now Smolyaninov thinks we can take the idea to new heights. In the same way gravity bends light, metamaterials can bend electrical and magnetic fields to create a metamaterial version of relativity. We can, he says, create metamaterials with electromagnetic spaces that possess compactified dimensions.

Not only that, but we could create metamaterials in which the number of dimensions and compactified dimensions changes from region to region, with wormholes transiting from space to space. We might even be able to witness the birth of photons in these metamaterials, the transition of which would in some ways represent the spawning of a new universe within the metamaterial itself. We could even create a metamaterial multiverse in which different universes have different properties, or wherein different physical laws apply. Bizarro World, here we come.

Put another, perhaps simpler, way, Smolyaninov thinks it’s possible to recreate several of our most out-there cosmological ideas within metamaterials, observing how they work and perhaps informing our search for the real meaning of how space and time work to make up the fabric of existence. We could even witness our own tiny Big Bang by engineering an optical “photon blockade” device in which topological transitions within the metamaterial resemble the birth of a universe. So by creating fake materials that don’t actually exist in nature, we might finally observe the real nature of the Universe. Which makes me wonder if perhaps we’re not in Bizarro World already.