Sports cars have long tested their 24-hour endurance on the Le Mans racing circuit in France. Now a Panasonic robot... 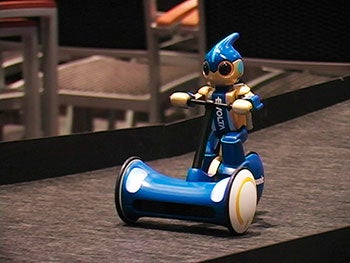 Sports cars have long tested their 24-hour endurance on the Le Mans racing circuit in France. Now a Panasonic robot named Mr. Evolta will try to claim the distance record for a remote-controlled car, pedaling along furiously at 1.3 kilometers per hour (0.8 mph).

The tricycling robot should manage about six laps of the 4-kilometer (2.5 mile) Le Mans circuit during the required day-long period, when it makes the attempt next Wednesday. It will navigate the winding course by following an infrared beam emitted by a lead buggy that travels ahead.

Two AA Evolta batteries will power the robot. These batteries supposedly possess greater capacity than other alkaline cells, with efficient sizing that allows more battery volume to be used for active ingredients.

But the tiny competitor faces challenges unique to its small stature. Tomotaka Takashi, the robot’s inventor, said that even insects could present a problem, by blocking the buggy’s headlights. Then there are other natural elements to consider.

“It’s almost impossible to expect 24 hours of nice, calm weather,” Takahashi told IDG News Service. “There could be a shower or [strong] wind.”

Still, that may not deter a robot that vaguely resembles an early Astro Boy prototype. Mr. Evolta’s previous exploits include climbing up a rope stretching more than 1,700 feet at the Grand Canyon. And if it succeeds in its current display of robotic derring-do, it will claim the Guinness World Record for distance traveled by a remote-controlled car.

For our part, it’s nice to see a robot that has not languished under the current worldwide recession, even if it is a front man for Panasonic batteries. Maybe Mr. Evolta can eventually ditch the training wheels and go for a real bike.