Play a small violin for thousands of Japanese industrial robots which now stand silent, victims of the global economic downturn... 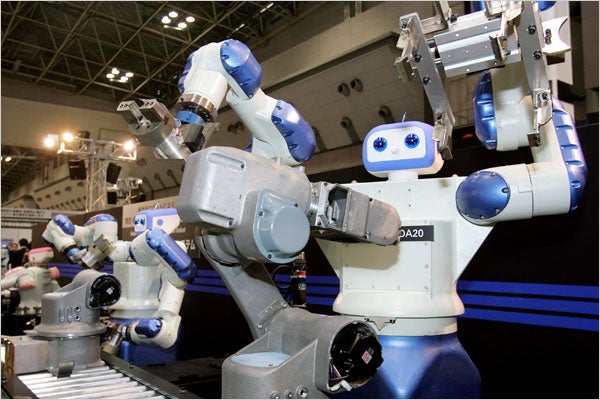 Play a small violin for thousands of Japanese industrial robots which now stand silent, victims of the global economic downturn in a country that hosts the highest robot-to-human ratio.

Recession times have proved a harsh reality check for Japan’s ongoing love affair with robots. Novelty robots have fared the worst, unsurprisingly, as cute or quirky represents the first to go when consumers check their wallets. But even the 370,000 industrial robot workers–the most of any nation–toiling away tirelessly in Japanese factories have seen a sharp drop in demand that mirrors Japan’s 40-percent overall decline in industrial production.

One analyst told The New York Times that he expects the industrial robot market to shrink by up to 40 percent this year. And the Japan Robot Association noted that shipments of industrial robots fell 59 percent in the first quarter of 2009.

For us squishy types, there’s a slight upside to the grim statistics – the analyst added that employers are eliminating robots first in order to protect the jobs of human workers.

Domestic helper robots that would help around the home or even care for the elderly have also sold poorly in the recession. This almost certainly puts a crimp in Japan’s plans to roll out a fleet of robots to help care for its aging population, when almost 25 percent of Japanese residents are 65 or older.

Perhaps robotics makers can take the opportunity to rub the shine out of their eyes and refocus on what exactly robots can do for humans. Even the more pragmatic designs cannot overcome current limitations on what robots can or can’t do well – neither function nor cost has yet to justify a robotic receptionist, or perhaps even a robotic caretaker for grandma or grandpa.

Robots which have found their niche continue to succeed spectacularly. For instance, the U.S. military shows no signs of slowing its demand for more unmanned aerial systems and ground bots that can aid warfighters.

Furthermore, cute doesn’t necessarily mean useless. Perhaps the dancing Keepon robot will still find its calling to help autistic kids. And researchers will continue to develop prototypes that look toward the future of robot-human interaction, such as smiling Einstein.