Robot Bartender Pours Your Drink Based on Your Tetris Skill 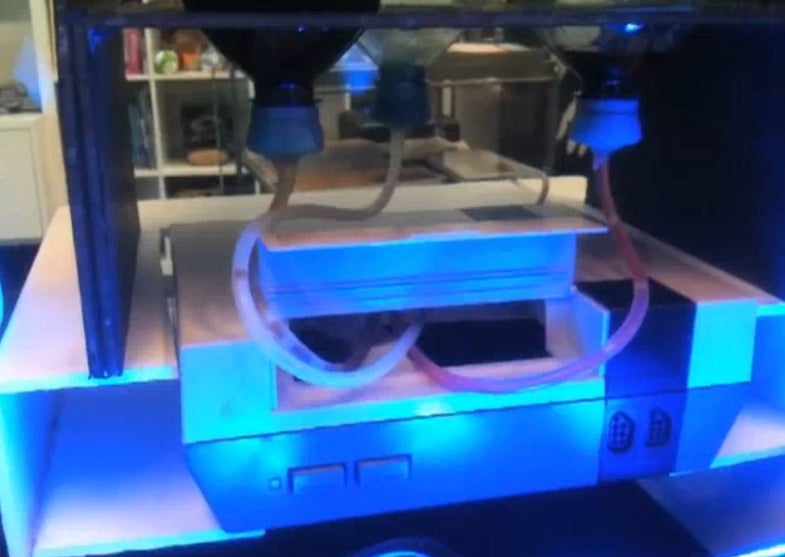 Robots, alcohol and video games make one tantalizing combination to put on distant-future Christmas lists. Now geek boozers are in luck: the one-man Nonpolynomial Labs has developed interactive versions of Mario and Tetris that incorporate a robotic bartender to mix up drinks during real-time play.

The interactive games come courtesy of Kyle Machulis, a self-described “mild-mannered engineer” who tackles some decidedly unorthodox garage projects that have included a “Moaning Lisa” sensor-feedback mannequin and a “LifeCycle” that uses an exercise bike to drive virtual vehicles in Second Life. He created “Adult Mario” and “Bartris” to showcase in the upcoming Roboexotica event held in Vienna, Austria, where robots display their cocktail mixing skills.

“Adult Mario” looks like a typical game of Mario Bros., except with a few interactive twists. Jumping on an enemy causes players to receive a small bit of rum in their cup. Grabbing coins adds a small squirt of Coke to the mix. Reaching the end-level flagpole triggers a shaking motion for as long as Mario slides down the pole, and adds an additional kick of rum during that time for good measure.

There are also less “adult” interactive elements, such as fans blowing into players’ faces when they run Mario faster through the game.

“So you actually have the chance of making a drink that absolutely sucks,” Machulis says in a video.

We also like the different “Bartris” modes, which include “Booze mode” (no water pieces dropped) and “Designated Driver mode” (only water pieces drop). And if you make a drink that’s too stiff or too watery for your tastes, you only have yourself to blame — not like playing with that straitlaced SOBEaR robot.