Redundancy is key for Stanford University's team. Its vehicle's brain contains six networked Pentiums that hold multiple copies of all the software 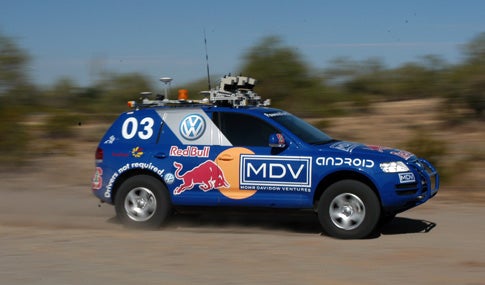 In this, the fourth of a series, Popular Science profiles one of the favored teams competing to win the Darpa Grand Challenge autonomous-vehicle race, which will take place on Saturday, October 8, near Primm, Nevada. Today we look at Stanford’s entry, affectionately dubbed Stanley, which is designed to automatically choose the best route. Stay tuned to popsci.com for more previews throughout the week and for minute-by-minute videos and updates on race day.

Rig
A rugged 2004 Volkswagen Touareg dubbed “Stanley,” outfitted with GPS capability and a complete suite of radar, stereo, video sensors and lasers. A sign on the side reads “Drivers not required,” a play on the VW slogan “Drivers wanted.”

Backstory
After watching last year’s race, Thrun got excited about the competition’s teaching potential and organized a fall 2004 computer science course called “Darpa Grand Challenge.” Although the initial prototype for Stanley was built in class, many students stayed to see the project through after the semester had ended.

Spotlight tech
The team’s de facto design philosophy is “Redundancy is key.” To that end, Stanley’s electronic brain consists of six networked Pentium M computers. This array includes multiple copies of every necessary program so that even if one or two of the computers malfunction, the vehicle will be able to continue the race. The team recently perfected control software that ensures that Stanley will automatically choose the most direct path that avoids obstacles and stays on the road. “It looks at many possible routes and picks the best one,” Thrun says.

Working style
Unconventional and playful. The off-road biker bar Slash-X, south of Barstow, California, is one of the team’s favorite haunts. After a long road-testing stint, the team stakes out a corner of the bar and starts programming on laptops to correct any operational mistakes that have cropped up during the day.

Piggy bank
Although the team is appearing in the race for the first time, sponsors Android, Red Bull and Volkswagen have already jumped on its bandwagon, contributing tens of thousands of dollars in money and supplies.

Odds of winning 20:1.
10:1. In a race as long and tough as this one, equipment is bound to backfire from time to time. Because Thrun’s team has made allowances for this possibility in its design, its vehicle should go far. “The field is very strong this year, so somebody is going to win it,” Thrun says. “I’m optimistic about our chances.”