What will next week bring? New games, new hardware 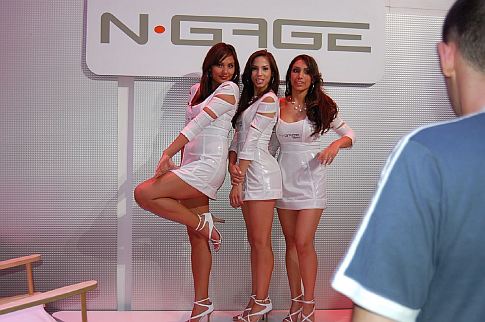 Courtesy of annual tradeshow the Electronic Entertainment Expo (E3), the holidays come early for PC and video game enthusiasts every year. Running June 2-4, 2009 at the Los Angeles Convention Center, the trade-only event is expected to draw 40,000 attendees hot to catch a glimpse of this and next year’s biggest releases.

Though just a shadow of its 2000-2006 glory years, when skate ramps and strobe lights dominated due to recent invite-only policies and publisher cutbacks, the confab’s still expected to be ground zero for industry announcements. With the rumor mill already buzzing, here’s a sneak peek at what could be some of the convention’s biggest titles and unveilings.

According to pre-show scuttlebutt, Sony may announce a new version of its popular PlayStation Portable (PSP) handheld, possibly titled the PSP Go! Upgrades are hypothesized to include built-in flash memory storage (in 8GB and 16GB flavors) and a move away from software sold on proprietary universal media discs (UMDs) to an emphasis on digital downloads. The system’s directional pad, analog joystick and buttons will reportedly now be mapped to a slide-out base hidden beneath the screen as well.

Speculation also abounds that Microsoft will reveal a motion-sensing camera named the Xbox Fluid. The gesture-tracking device will reportedly allow users to control games through physical motion with a full range of 3D movement, rather than via a dedicated controller like the Wii remote.

As for Nintendo, set to soon introduce the Wii MotionPlus accessory, a controller add-on that allows greater motion-sensing accuracy, the emphasis is expected to be on returning franchises. Possible new installments in the Mario, Pikmin and Zelda lines for the Wii are all anticipated. News on upcoming downloadable offerings for the online shop-enabled DSi handheld will surely be forthcoming as well.

Speaking of games, we’re excited to get a look at promising outings including God of War 3, Star Wars: The Old Republic, Mass Effect 2, and The Beatles: Rock Band. This video game expert’s got a special jones for BioShock 2, a haunting first-person shooter that sees you playing a drill-armed, diving suit-clad, DNA-harvesting “Big Daddy” pitted against gene-tinkering loonies and a female arch-nemesis. Rest assured that there won’t be a lack of choice whatever your preferred genre though, from music (Guitar Hero 5) to action (Dark Void), adventure (Uncharted 2), racing (Blur), role-playing (Dragon Age: Origins) or sports (Tony Hawk: Ride).

Nonetheless, the underground is most abuzz over possible high-profile unveilings such as a fresh project from celebrated software maker Team ICO, a second downloadable episode for Grand Theft Auto IV (said to be called “Blood and a Four Leaf Clover”) and a new Metroid Prime. Popular action-adventure Metal Gear Solid 4 is further expected to arrive on the Xbox 360, while Lionhead Studios, makers of the celebrated Fable II, is also rumored to be debuting acclaimed designer Peter Molyneux’s new title, code-named Richter. Who knows? After an extended hiatus, showgoers could get a more in-depth look at APB and Alan Wake, while those feeling the need for speed may even catch a glimpse of Forza Motorsport 3 and Gran Turismo 5‘s taillights shining in the distance.

While everything is pure speculation and hearsay at the moment, we’ll be on-hand at the show to track breaking news as it develops. Trying to keep tabs on all the juicy tidbits about to gush from the storied convention is a taxing game unto itself, but one that — like all veteran joystick twiddlers — we secretly relish playing.

Get Rich Playing Games author and TV/radio host Scott Steinberg has covered technology for 400+ outlets from CNN to Rolling Stone. For more of his insights, visit www.thevideogameexpert.com or www.gadgetexpert.net.