Robots of the Deep Blue Yonder

Popular Science had a conversation with one of the most visionary developers of autonomous subs. 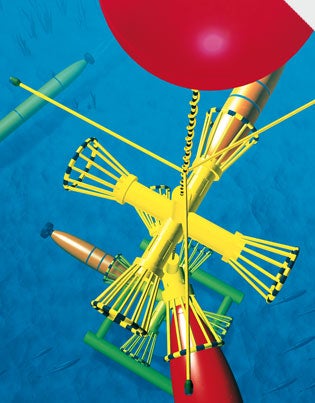 Clayton Jones of Webb Research in East Falmouth, Massachusetts, is a lead developer of the Slocum Glider, which uses an innovative thermal engine to power its undersea journeys. Instead of motoring back up to the surface after a dive, which eats up battery life, the thermal glider powers itself by capitalizing on the drastic temperature and density changes between deep ocean and surface water.

When the glider reaches a preset depth, a preloaded spring pumps mineral oil into an external bladder, increasing the buoyancy of the glider and causing it to rise. On the way to the surface, gradually warming water slowly melts the solid wax inside the engine. The wax expands, pushing more mineral oil against the spring and reloading it for its next dive.

Years spent developing the Slocum robotic sub seem to have blurred the boundary between scientist and device: Jones often refers to the sub as “we” instead of “it.”

Popular Science: Why does the expanded bladder cause the glider to float?

Clayton Jones: This whole glider concept is driven by buoyancy. We’re neutrally buoyant compared to the water around us. We’re either just floating or just sinking. By changing the volume of the instrument-we don’t change the weight-by pushing the mineral oil out into an external bladder, we suddenly take up more space for the same weight. We become lighter than the water around us, and we float.

PS: What about the next dive?

CJ: When we want to go down, we kind of take the oil back into the hull and shrink the bladder. For the same amount of weight, we shrink our volume. We become denser than the water around us, and we sink.

PS: The glider needs the huge range in temperature from the surface to the deep ocean in order to recharge the engine. Does this limit its capabilities?

CJ: Yes, it has limits. You wouldn’t use it in shallow or coastal water applications, where the water is mostly warm. Yet if you look at those constraints in a global sense, we can fly in about 80 percent of the world’s oceans.

PS: There are no rudders, so how does the glider steer?

CJ: Basically, we’re shifting the battery pack around to control the steering and the flying. It’s kind of like flying a hang glider. The battery can move side to side, or fore and aft to give you some pitch control.

PS: What happens if it bumps into something?

CJ: We tend to be in deeper water, so we don’t really worry about the bottom. And it’s a rather slow-moving vehicle. It travels at a horizontal speed of about 1 knot. So if you hit something, you’re just kind of going to bounce off it and keep on marching.

PS: What kind of information does it pick up along the way?

CJ: The salinity, temperature, density of the water at different depths. You could have a fleet of gliders just running back and forth across the Atlantic Ocean. This could give you an idea about global warming.

PS: How is this better than current measurement techniques?

CJ: With acoustic tests, you’re making sounds and listening to them a couple thousand kilometers away, giving you an idea of the temperature because it directly affects the speed at which the sound travels. But what’s missing is something marching back and forth in between, which would give you an idea of the density of the water at different points. So our gliders would certainly complement that kind of experiment. And it wouldn’t cost $25,000 to $40,000 a day, like a research vessel.

PS: So for how long could the gliders run?

CJ: Because the thermal cycle does your propulsion, you can think of operating them for as long as four years. The batteries don’t have to provide the buoyancy drive. They’re simply running the communication, the data collection and the navigation.

PS: Speaking of which, how does the glider send its data back?

CJ: It’s an autonomous vehicle, so it’s down there flying a mission without communicating with us. But as it comes to the surface it gets GPS-fixed for its navigation and it calls in-if we’re close enough-through a radio-frequency modem link. It says, ‘Here’s the latest information, and if you wish you can send in a new set of mission instructions.’

CJ: We’re slated to leave on the tenth of January to run thermal glider trials in the “tongue of the ocean,” or TOTO, off the Bahamas, with the Woods Hole Oceanographic Institute and the University of Miami.