The hottest, fastest lifeguard on the beach is named EMILY 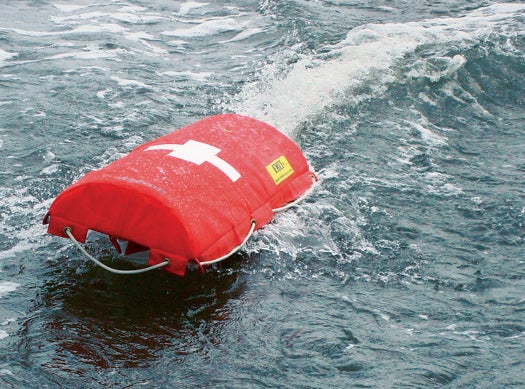 You’re caught by the ocean’s riptide, exhausted and barely keeping your head above water. Then your unlikely hero appears: a four-foot-long talking buoy. It’s EMILY, the robot lifeguard. Grab on, and it can bring you safely back to shore.

This summer, EMILY (for EMergency Integrated Lifesaving lanYard) began patrolling Malibu’s dangerous Zuma Beach and will watch over about 25 more by December. Although lifeguards operate this version by remote control, next year’s model will autonomously save potential drowning victims as reliably as a human. Once a lifeguard tosses EMILY into the surf, its sonar device will scan for the underwater movements associated with swimmers in distress. Its electric, Jet Ski–like impeller drives it at 28 mph through even the roughest chop, getting a flotation device—itself—to victims six times as fast as a lifeguard would. The ‘bot’s camera and speakers will let an onshore lifeguard calm the person and instruct him to wait for human help or to hold on as EMILY ferries him back.

The autonomous version will go on sale next spring for $3,500, says Tony Mulligan, CEO of Hydronalix, the Arizona company developing the ‘bot, and will work alongside human lifeguards. “Most lifeguards have spent their life in the ocean, learning how it acts. You can’t give that experience to a computer,” says Brandon Chapman, a Zuma beach lifeguard who tested EMILY. “But I don’t have sonar. If I was out at sea, I would be pretty stoked if EMILY showed up.”

1 Ready for action
EMILY patrols solo or is thrown into the sea from the beach, a helicopter or a ship.

2 Search and rescue
EMILY’s sonar finds a distressed swimmer, and it jets toward him at 28 mph.

3 Mission accomplished
A swimmer holds onto EMILY as it gently brings him to shore or waits for a lifeguard. The robot can travel up to 80 miles on a single battery charge.