Getting High on Helium 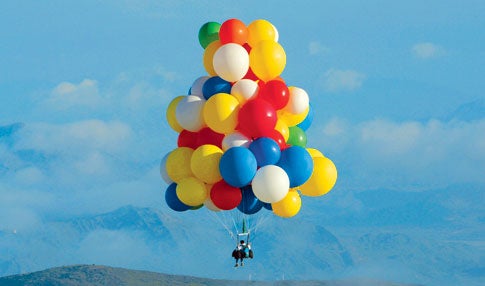 Getting High on Helium

Anyone who’s ever been eight years old has wondered the same thing: How many balloons would it take to carry me up into the sky? John Ninomiya knows the answer. He’s logged 32 flights–and ascended as high as 21,400 feet–dangling beneath clusters of between 40 and 120 helium balloons.

An avid hot-air balloonist, Ninomiya first attempted his boyhood dream in 1997, when he teamed with ballooning pioneer Don Piccard to fly a cluster of seven custom-built Mylar helium balloons. The rig worked, but it suffered from buoyancy-control problems. Later, Ninomiya switched to smaller balloons made of latex, which were not only lighter and easier to pop, but also biodegradable and less expensive. Ranging in size from four to seven feet in diameter, each balloon can lift as much as 10 pounds. Ninomiya varies the mix depending on the needs of each flight. Larger balloons are easier to fill, but the only way he can descend is by selectively popping balloons, so using a larger number of smaller ones gives him more control. He flies eight to 10 times a year; each flight lasts around two hours and costs about $2,000.

As simple as it seems, you definitely shouldn’t try this at home. Ninomiya has little directional control of his rig–he pops balloons or lets out ballast to change altitude in hopes of catching an air current moving in the direction he wants to go. He also wears a parachute, although he expects never to use it. “Most of the things that can kill you happen at landing,” he says. Learn more at Ninomiya’s site, clusterballoon.org.

BUILDING A BUOYANT CLUSTER
1.The neck of each balloon is wrapped in masking tape, doubled over to form a loop, and sealed with cable ties. Braided #36 nylon twine from Home Depot is tied to the loop with a bowline knot.

2.Ninomiya wears a standard paragliding harness and an emergency parachute.

4.To prevent tangling, he ties balloons in sets of four to a carabiner, which in turn is fastened to a webbing strap connected to the harness. Clusters are organized in three tiers, with the topmost four connected to 15-foot risers, the middle four to shorter risers, and the remaining clusters directly to the harness.