Inside the hotly contested creation of ‘ice X’ 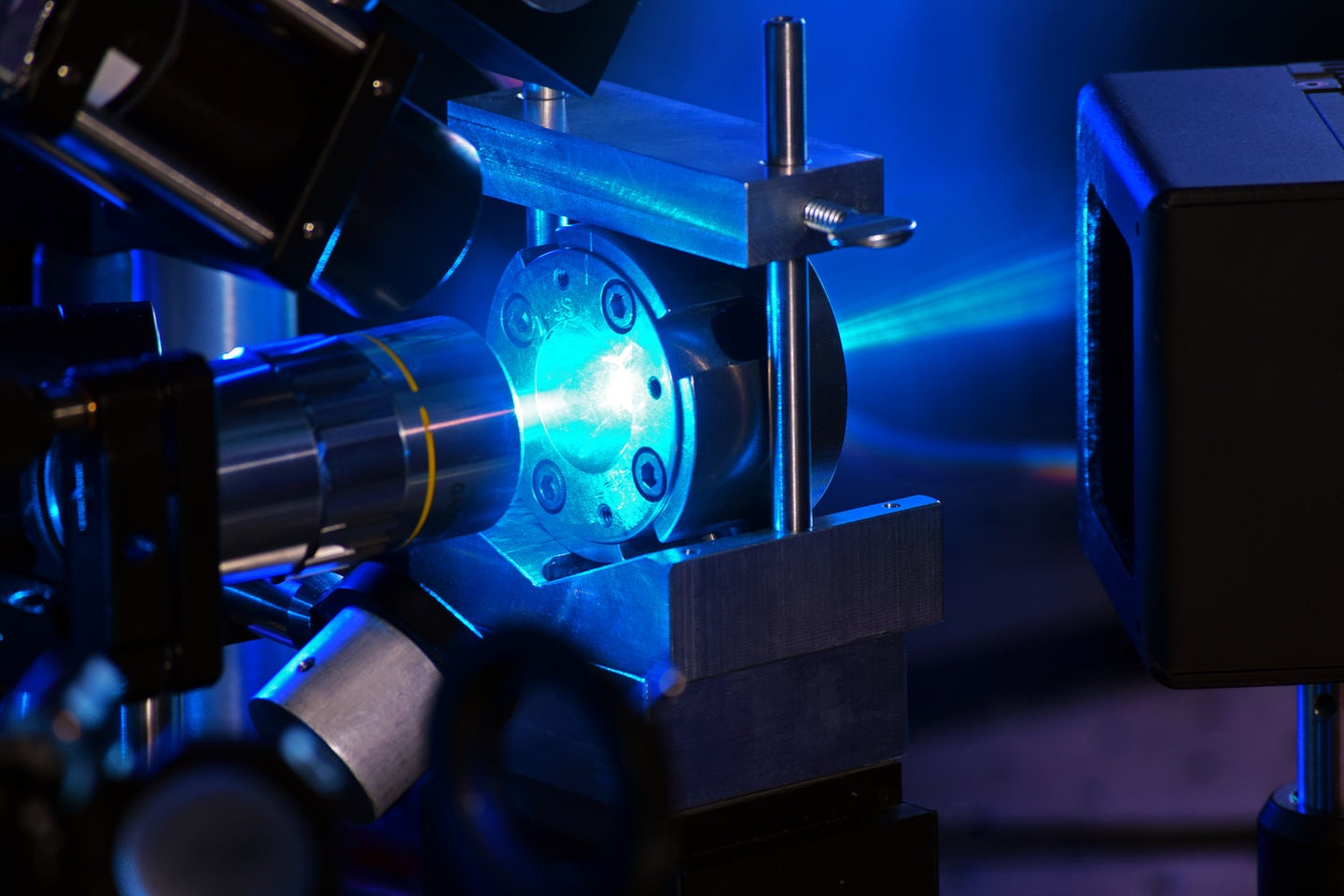 Researchers press ice between two diamonds and heat it up with a laser to create exotic phases of ice. Chris Higgins
SHARE

The ice in our freezers usually comes in one form, with its water molecules arranged hexagonally—which is why snowflakes always have six points. But up to 20 different variations of ice exist in nature, depending on the surrounding pressure and temperature. A type of ice called ice VII has been found trapped inside diamonds purged from Earth’s mantle, for example. Scientists have also theorized that deep in the hearts of icy planets, a mysterious phase known as ice X percolates.

Creating these exotic phases in the laboratory is a grinding task, but there has been no lack of effort by scientists around the world in the last few decades. One research group at the University of Nevada, Las Vegas has purportedly observed a newly discovered phase, called ice VIIt, as well as the elusive ice X. Ice X stands out from the crowd for its unique bonds between the water molecules. The scientists say ice X occurred at 300,000 times atmospheric pressure–extremely high to us, but a record low for the existence of this unusual ice.

“We were pretty excited and surprised,” says lead author and physicist Zachary Grande. “A lot of people hadn’t believed it.” Since the first detection, the team spent three years confirming their result. The researchers published their work last week in the journal Physical Review B.

However, other experts are skeptical about whether the results really point to ice X.

“The work confirmed previous reports of anomalous transitions in ice VII under pressure,” writes Russell Hemley, a physical chemist at the University of Illinois, Chicago who wasn’t involved in the study, in an email. However, he thinks that more evidence is needed to confirm the formation of ice X with new research.

A water molecule is made up of two hydrogen atoms and one oxygen atom. Each water molecule is strongly attracted to its neighbor. This intermolecular attraction can space out water particles in many ways and influence where each hydrogen sits between the two oxygen atoms. This conformation of the atoms dictates the phase of the ice.

The aptly named ice X is arguably the most extreme of all the phases. It’s the only one where every hydrogen sits squarely in the middle of two oxygens throughout the entire crystal lattice. In the other phases of ice, such as ice VII and ice VIIt, the hydrogen randomly sidles up to one of its flanking oxygens.

[Related: What the heck is ‘ice VII,’ and why are scientists using lasers to make it?]

Pinpointing the appearance of ice X is as tricky as walking on thin ice. Its signature is the hydrogens’ positions relative to the oxygens. But hydrogen, being the lightest atom in the periodic table, is nearly invisible. Most experimental techniques infer where the hydrogen is by probing water’s hydrogen-oxygen bond, rather than directly observing the hydrogen atoms.

Grande and colleagues claim to have manifested ice X at the lowest pressure yet, deducing its presence from the oxygen atoms’ vibrations. The researchers crushed ice between two diamonds and periodically heated the solid with a laser in a method they call “cook and look.” The laser melted the jumbled crystals, allowing the ice to recrystallize into a different atomic configuration.

At 5 gigapascals—50,000 times atmospheric pressure—the team detected a new intermediate phase they called ice VIIt, in which the atoms were arranged differently from ice VII. Further compressing ice VIIt to 30 gigapascals changed its structure again. By measuring vibrational energies of the hydrogen and oxygen atoms, the researchers inferred that ice X joined the party. They also noticed that the hydrogen-oxygen bond stiffened, which is another possible characteristic of ice X.

Alexander Goncharov, a physicist at the Carnegie Institution for Science who didn’t participate in the research, disagrees that the researchers cooked up ice X. He says he’s performed similar measurements in the past and failed to find evidence for ice X at these lower pressures. Previously, his team demonstrated that ice X only appeared at a pressure of around 60 gigapascals.

Vibrational energy data is not a smoking gun for ice X and prone to misinterpretation, adds Goncharov. Rather, the most “bulletproof evidence” for ice X is X-ray or neutron diffraction measurements, he says, which can reveal the solid’s crystalline structure. However, these methods are challenging to execute, and may require scientists to tamper with the ice itself to render the hydrogen atoms observable.

New claims of detecting ice X are as frequent as they are dubious, says Goncharov. To date, he says that no study, including his own work, has irrefutably proved the discovery of ice X since its first supposed detection in the 1980s.

But no one in the field doubts the existence of ice X. “Of course it exists,” Goncharov says. “The physical models are so clear, and the truth speaks for itself.” He compares the theory for ice X to Albert Einstein’s predictions of relativity—other scientists believed in them at the time, but only years later did new generations of scientists perform the experiments that corroborated his hypotheses. Like the astrophysicists who found evidence for Einstein’s ideas on black holes, gravitational waves, and spacetime, it’s up to future ice X experimentalists to convince the rest of their peers and prove theory right.