These long-fingered lemurs pick and eat their boogers, just like humans 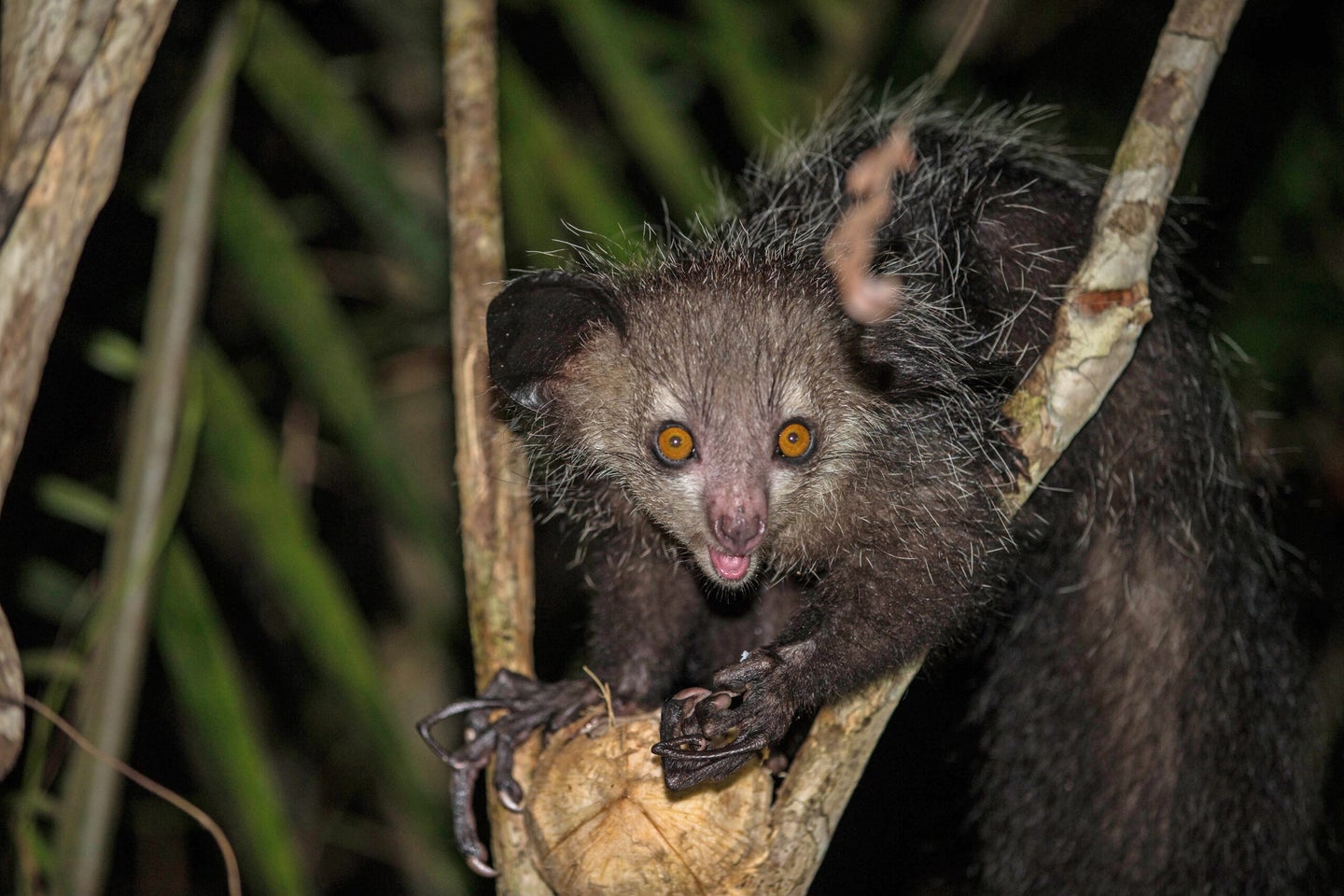 Fact: Scientists are feeding poisoned toad butts to predators to save their lives.

Cane toads hopped across Australia beginning in the 1930s. Scientists brought them in originally to try to combat the cane grub attacking sugar cane farms. Unfortunately, cane toads weren’t much for cane grub control. Instead, they bred really well and started hopping west. (For the best possible content on this, I recommend this iconic cane toad documentary on YouTube.) In the process, they came to the attention of the local predators. But cane toads are toxic! They have poisonous pads on their shoulders. Predators who ate them quickly found out they had eaten their last meal. Up to 90% of predators would end up dead as cane toads spread west. To save the predators, scientists have started giving naive predators bits of toad before the real ones arrive, hoping to teach the predators that toads are a never food. Some predators get sausages made of toad, others get non-poisonous toad butts. Both are laced with lithium chloride, a substance that doesn’t kill, but does make the animals feel very, very nauseated. The animals that rely on live prey get exposed to baby cane toads, ones too small to kill them outright, but with enough poison to make the predators learn their lessons. So far the toad butts appear to work! Predators exposed to cane toads only decline by about 50% when the big toads arrive. It’s still bad, but not as bad as it could be.

For more on cane toads, and on the other amazing animals that we hate, and why we hate them, check out Bethany Brookshire’s book, Pests: How Humans Create Animal Villains, wherever fine books are sold.

FACT: No one actually thought riding a train would make your uterus fly out of your body—but the moral panic was very real.

A couple years back on Weirdest Thing, I talked about how the invention of the modern bicycle led to all kinds of moral and medical uproar about why women shouldn’t ride them.  And in my recent book, I talk about the history of the term hysteria—which was once a fully serious medical belief that the uterus wandered around the body following exciting smells like some kind of feral rodent, thereby impacting health.

Both of these stories prompted friends and readers and listeners alike to say “you’ve got to talk about how when trains were first invented, men thought that moving at such speeds would make a woman’s uterus go flying right out of her!!!”

I’ve attempted to do this episode multiple times, but my cursory research efforts have always come up short. I found loads of blog posts and listicles and Reddit comments discussing this historical anecdote, but kept striking out on an actual historical source. As it turns out, there probably isn’t one!

This specific supposed factoid seems to come from a 2011 interview with a technologist from Intel. And in her defense, the way she paraphrased the historical attitudes around trains was pretty clearly, at least in my reading, meant to be off-the-cuff and a bit hyperbolic. But people really latched onto the idea that Victorian men literally thought organs were getting ripped out of bodies, and it’s gotten repeated as fact over and over.

The closest thing we actually find to this in the historical literature, though, is an article in the New England Medical Gazette from 1870, where a doctor fussed over the strong vibrations of the bench a woman might sit on while riding a train, and how that might delay a menstrual cycle and/or cause “uterine flexion or dislocation.”

Important context here is that people still believed in the whole hysteria thing, whereby the uterus shifted around the body and caused trouble. A lot of physicians by this point had come up with more modest and reasonable amounts of motion a uterus could undertake, in contrast to their forefathers who had literally thought that thing could go anywhere, but they still thought it was an organ prone to ending up in the wrong spot. So, someone saying this is very different from someone saying they thought trains would send your uterus flying out your vagina.

That’s not to say that Victorians were chill and reasonable about railway trains (or uteruses). According to papers from the 1860s, which was a few decades after passenger steam trains first became a thing, consumers had been worried about everything from suffocating in tunnels to fainting in the exhaust fumes. When The Lancet solicited research on rail travel in the early 1860s, doctors blamed it for everything from miscarriage to brain congestion.

In hindsight, we can see the clear rise of a moral panic around railway travel. In the 1860s and 1870s, as train travel became more ubiquitous—even as doctors wrote confidently that fears of asphyxiation and such had been unfounded—there started to be accounts of totally healthy people boarding trains and being driven to violent madness. There was loads of media coverage, which may have made people who were on-edge more prone to having the sort of breakdown they were supposed to have on a train. People also started to write stories about how patients from mental asylums could just pop onto a train and you’d never know, and you’d be stuck with them, which really puts the concept of Uber Pool into sharp perspective.

There was also a lot of debate over something called Railway Spine, which referred to the long term physical distress reported by survivors of the first passenger train crashes. Railway owners saw this as an obvious sign that folks were faking distress for money, but doctors worried that something about the high speeds of rail—and the resulting force of its collisions—could be creating an illness they’d never seen before. Now it’s easy to characterize these symptoms as traumatic brain injuries, PTSD, or both. But the belief that there was something special about trains that made them particularly dangerous may have

led to the general sense of panic around them.

Trains were obviously not our first moral panic over technology. Ancient Greek philosophers like Socrates groused about how writing and reading were a slippery slope into laziness and anti-intellectualism, since obviously the natural way to learn new information was to hear it in person and then just remember it perfectly. People thought telephones would electrocute them and keep everyone from leaving their homes. Zippers may have been associated with laziness and moral decay. The printing press would allow for false prophets to print satanic bibles. Reading popular novels would rot young peoples’ brains.

In her 2020 paper “The Sisyphean Cycle of Technology Panics,” Cambridge University experimental psychologist Amy Orben points out that adolescents are often at the center of moral panics around new tech. Orben also points out that we’ve looped scientists into these questions, looking for data-driven answers on how something might impact our youth. But she notes that these studies are almost always flawed—they make generalizations about who uses the tech and how, and assume all people using it will be affected the same way, and generally have a specific negative outcome they’re looking to connect it to.

The beauty of the aye-aye is in the eye of the beholder, as they say. This species of lemur from Madagascar, Daubentonia madagascariensis, is often known for its visually striking looks—a coat of shaggy, wispy black and gray fur, large bat-like ears used for echolocation, and a pair of bright yellow-orange eyes that seem to piece into your soul. Averaging about 15 inches long and five pounds, they’re one of, if not the largest known nocturnal primate in the world. But perhaps the aye-aye’s most notable feature is its long, spindly fingers.

Aye-ayes, in general, have very strange hands. For one, biologists discovered in 2020 that they actually have a sixth finger, tiny pseudo-thumb, on each wrist that might have evolved to help the aye-ayes grip branches and climb. The rest of their fingers are noticeably long—the fourth and longest finger accounts for more than two-thirds the length of its hand. If you consider the human hand, a finger with the same proportions would be nearly a foot long. Instead of being cumbersome, these solitary tree dwellers have developed a variety of specialized functions that take full advantage of the long appendages. For instance, they’ll tap their digits along branches and trees and listen in for insect grub with those echolocating ears. When they hear a delectable snack scuttling inside, they’ll use their fingers to scoop out the food. Researchers at the Duke Lemur Center, a leading lemur research and education hub, have also found that the third middle finger—which can be around three inches long—can be used to drink water and eat fruit.

In November, a study in the Journal of Zoology reported observations of an aye-aye inserting the entire length of its skinny middle finger into its nose, before proceeding to lick it clean of snot. Yum. Study author from the University of Bern, who worked with the Duke Lemur Center, noted that the nose-picking and eating behavior—known scientifically as mucophagy—didn’t seem to be a one-off instance. The researchers also obtained museum specimens of the head and hand of an aye-aye and took CT scans of the nasal cavity, which revealed that the finger could reach all the way down to the throat.

Only 12 primate species have been observed to pick their nose, whether with fingers or sticks or other tools, the study authors report. This includes humans, gorillas, chimps, and now aye-ayes. It’s still a mystery why exactly the aye-ayes, or any nose-picking animal, eats their boogers. The study authors pointed to past studies that suggest humans may have evolved ingesting boogers to boost the immune system, or that the slimy materials coats our teeth and prevents bacteria from sticking, which might improve oral health. Others have proposed snot could have some sort of nutritional value for animals. But these findings aren’t concrete, and other studies contradict that booger eating is good for you. For instance, other experts suggest that picking your nose in general can spread or introduce harmful bacteria to your nasal cavity.

While the answer might be up in the air, the study does shed light on another trait primates seem to share. Unfortunately, aye-ayes get a bad rap because of their appearance—including that long booger-picking finger. Folklore has said if the aye-aye’s finger points at someone, it’s thought they are marked for death. This has caused aye-ayes to have been killed in the past, and they are an endangered species due to habitat loss. Scientists in Madagascar have found that not all villages and locals have this negative perception of aye-ayes. Some locals have actually found that they could be a beneficial form of pest control because they like to eat bugs that infest sugar cane crops.