Unless your finger is aggressively digging in your schnoz, feel free to mine for gold in peace. 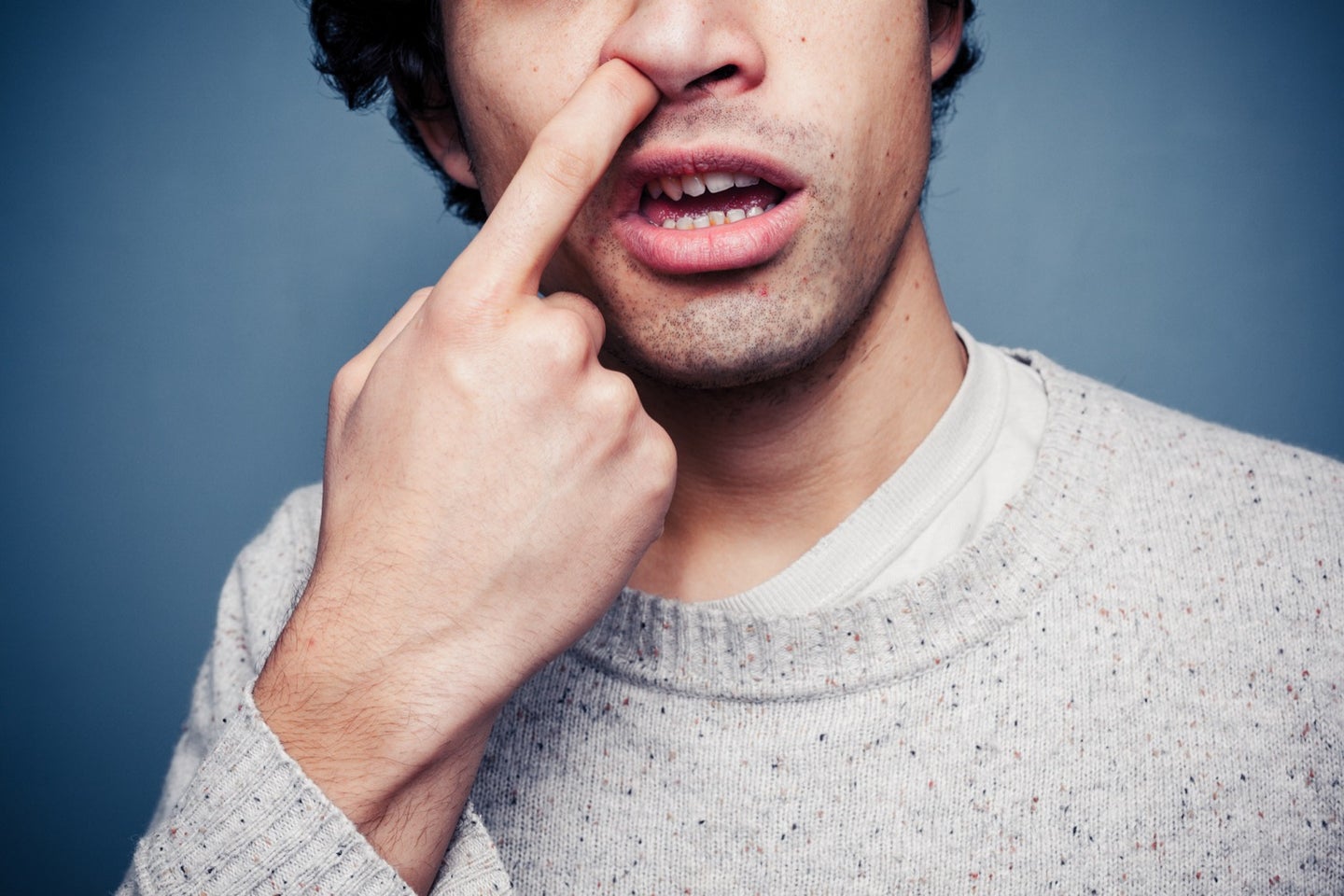 A study is stirring misinformation about nose-picking and Alzheimer's. Deposit Photos
SHARE

Few openly admit it, but everyone picks their nose. Whether you’re digging for treasure, out of irritation, boredom or habit, it’s natural to indulge once in a while. Most start sticking their fingers up their schnozes as toddlers, and continue the occasional pick and flick as adults. But nose picking recently flooded headlines in a rather alarming—and misleading—way.

An Alzheimer’s study published in the journal Scientific Reports this February has generated a lot of buzz over the past week after Griffith University in Australia published a press release that linked nose-picking to a risk factor of late-onset Alzheimer’s disease.The reason, both the writeup and one of the study authors suggested, is that a harmful bacteria Chlamydia pneumoniae could travel up the nose and into the brain where it could create signatures of Alzheimer’s disease. (Popular Science reached out to the same study author for comment, but did not get a response.)

Days after the initial press release, some news outlets ran fear-mongering headlines like “Picking Your Nose May Cause Dementia!” and “How picking your nose could increase risk of Alzheimer’s and dementia.” But there’s one problem—the study never showed that nose-picking causes future neurodegenerative disease. Instead, it describes a map of how outside pathogens might enter and infect the brain. “The study was very well done, but it’s important not to take it out of context,” says James Giordano, professor of neurology and biochemistry at Georgetown University Medical Center, who did not participate in the research. “Never did they say in the findings if you pick your nose, you’re going to get Alzheimer’s.” Here’s what the study really found.

What was the “nose-picking” Alzheimer’s study about?

Alzheimer’s, the most common form of dementia in the US, impairs parts of the brain that control memory often in adults older than 65. But researchers are still trying to fully understand the exact mechanisms that trigger the disease. Past studies have suggested that certain bacteria and infections could be involved in damaging the same brain areas and functions commonly associated with Alzheimer’s. But evidence has remained unclear.

[Related: One big reason why Alzheimer’s might be going undetected in the US]

In the February study, the authors found a potential nasal route for bacteria to reach the brain. When the olfactory mucosa, a membrane found in the upper region of the nose, is damaged, it gives the invading bacteria entry to an area heavily innervated with endings from the olfactory nerve. The olfactory nerve controls a person’s sense of smell and is one of the shortest cranial nerves as it starts at the brain to the upper roof of your nose. If bacteria bypasses the olfactory mucosa, it can travel directly into the brain. Giordano describes the journey as a “minimum toll road” to the brain, with the nasal mucosa being the only area where you’re forced to stop.

“If the nasal mucosa tollbooth is down, you can get right on the olfactory nerve superhighway and move up the brain.”

The team observed signs of the brain fighting an infection days after the olfactory mucosa was injured. Additionally, they noticed increased Chlamydia pneumoniae levels, a buildup of beta-amyloid plaques (clumps of proteins that may block cell signaling at synapses) in the brain, and altered genes related to Alzheimer’s. The authors speculate the bacterium infected and hid inside glial cells, or non-neuronal cells, giving it time to clone itself and spread to other parts of the brain.

While not studied directly, Giordano theorizes the bacterium could influence the development of Alzheimer’s by extending the time the brain is in a proinflammatory state. As the brain increases inflammatory responses to fight the bacterial infection, it could lead to a rise in chemicals called superoxides. Superoxides alter the metabolism of brain cells, which can then produce abnormal structural and functional proteins such as beta-amyloid and tau—fibers that can tangle and slow down memory recall.

Can nose-picking damage your nose and trigger Alzheimer’s?

Extremely unlikely. As Giordano points out, the Scientific Reports study never set out to find whether Chlamydia pneumoniae leads to Alzheimer’s or dementia. Instead, it aimed to determine the probability that repeated intrusion of the nasal mucosa would give infectious agents the means to reach the brain through the olfactory nerve, which is a few degrees away from developing the actual condition.

“What they’re suggesting is that individuals with repeated violations of the nasal mucosa have a high enough probability of bacteria and viruses migrating to the brain and potentially activating a proinflammatory state, which then has the potential for inducing neurodegeneration.” In other words, the study lays out theoretical scenarios explaining how bacteria could trigger Alzheimer’s, though it doesn’t answer whether nose picking can be a cause.

[Related: We have now seen our sense of smell in action]

Giordano notes three other issues with drawing conclusions from this type of research. First, it only included mice. While the species is usually an excellent model for studying Alzheimer’s and other diseases, at minimum, it would take 3,000 times more infectious agent to damage the olfactory mucosa in a larger subject. The second issue is that the study does not address whether the human immune system is more capable of responding to airborne or environmental agents that cause disease. This would mitigate any damage pathogens would have in the nose. Lastly, the neuroscientists involved in the research were not watching mice for hours until they picked their noses. Their experimental model involved inserting enough bacteria into the mice’s noses to break the nasal mucosa, which is not how people naturally encounter foreign pathogens.

Does this mean you can go back to nose-picking to your heart’s content?

Yes, but you still want to be cautious. Picking your nose doesn’t make the list of things that can cause severe injury to the nasal mucosa—you could cause more damage clipping your nose hairs or getting a foreign object stuck up there. Still, there’s a huge difference between someone who picks their nose every once in a while and someone who’s probing their schnoz all the time.

If you aggressively pick your nose or do it with a dirty finger, you may get nosebleeds from scratching your insides. What’s more, frequent nose-picking increases the probability of introducing or spreading other types of bacteria or viruses that may try to invade your cerebrum. This has been a concern with SARS-CoV-2, in that it could directly infect the olfactory epithelium and affect a person’s sense of smell, Giordano explains. “That’s why the study is very good. It’s asking whether other infectious agents use similar vectors to access the brain.”

It’s a valid question to ask, and could maybe lead to more specific research on devastating diseases like Alzheimer’s. But the leap from picking your nose to Alzheimer’s is too far. So, for now, it’s better not to spread any scary assumptions.