Supercomputers Calculate Structure Of Bones On The Molecular Level 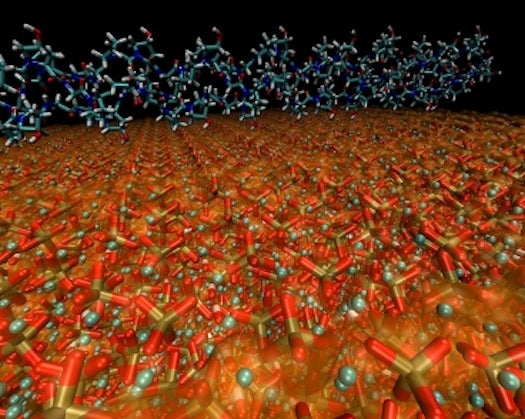 Like the best of statesmen, bone is both strong and a little bit flexible. That’s because it combines a soft, gel-like substance (collagen) with a stiff, strong one (mineral hydroxyapatite). Now, one team of engineers say they’ve figured out that balancing act in detail, elucidating how the molecular structure of bone fibers help them take advantage of the best of both worlds.

Fibers of collagen, strengthened with hydroxyapatite crystals, are the basic building blocks of bone. They’re found in many different animal species, and they show up in skeleton bone, teeth and antlers.

Using a supercomputer, engineers from MIT calculated what those fibers look like at a nearly atomic level. They compared their fibers with data from previous studies of real bone, to check their computer-generated model was accurate. Then they carried out tests on their virtual fibers with different levels of collagen versus mineral, to see how they respond to stress and strain.

Among the discoveries they made was that the hydroxyapatite in bone fibers likely forms tiny platelets just a few nanometers thick. Large pieces of hydroxyapatite are brittle, like chalk, but at such small sizes, the mineral is actually ductile. The researchers also found that under stress tests, the mineral parts of the fibers took on four times as much stress as the collagen portions, whereas bending happened almost exclusively in the collagen.

Such computer-based experiments would have been impossible even just a few years ago, the MIT group’s lead scientist, Mark Buehler, told MIT News. Modeling the molecular structure of bone fibers would have taken years on a supercomputer. For this study, the calculations took a few months.

Buehler now hopes to replicate bone fibers in lab, for different engineering projects, he said. He and his team published their supercomputer work yesterday, in the journal Nature Communications.