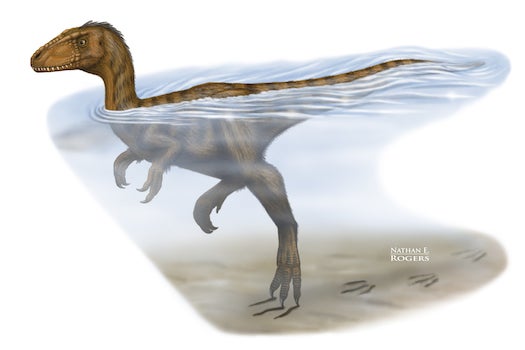 Most people still have a very last-century idea of what dinosaurs were like. No, T. rex didn’t stand upright; lots of dinos were actually feathered, not leathery; and they may have been killed by a comet, not an asteroid.

Now there’s some new research to further muddle your mental image: Some of those clumsy-looking land dinosaurs, like the early tyrannosaur, may have actually been strong swimmers. Scott Persons, a researcher at the University of Alberta, examined fossilized claw marks on a river bottom in China’s Szechuan Province. Persons found that the scratches, which cover a distance of nearly 50 feet, suggest coordinated left-right, left-right paddling.

“What we have are scratches left by the tips of a two-legged dinosaur’s feet,” Persons says. “The dinosaur’s claw marks show it was swimming along in this river and just its tippy toes were touching bottom.”

The claw marks were probably left by a carnivorous theropod dinosaur that stood just over 3 feet at the hip—possibly an early tyrannosaur or a Sinocalliopteryx, Persons says.

The study appeared April 8 in the journal Chinese Science Bulletin.