How Many Model Rockets Would You Need To Get To Space? [Infographic]

A lot of them! And that's just if you know how to stack them for optimal use. 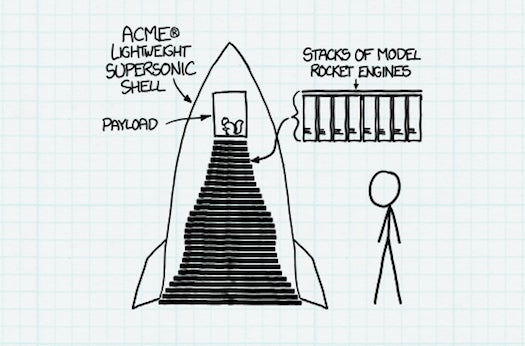 Today, the always-great web-comic XKCD gets Wile E. Coyote on everyone by explaining how many model rockets you’d need to shoot a rocket into space. (Spoiler: you will need several model rockets.)

The creator of XKCD, Randall Munroe, is a former NASA roboticist, and he gives a pretty straight-faced answer on the necessary number of model rockets (65,000-ish) and the best way to arrange them (layer-upon-layer).

So it can be done! But that’s just enough to make it to space–making it to orbit on model rockets is a tougher proposition. Basically, you’d need a gigantic model-rocket spacecraft. And as Munroe writes: “If it went up in flames–which it would–it would break the record for the largest manmade non-nuclear explosion in history.”

Maybe just buy a ticket to space instead.