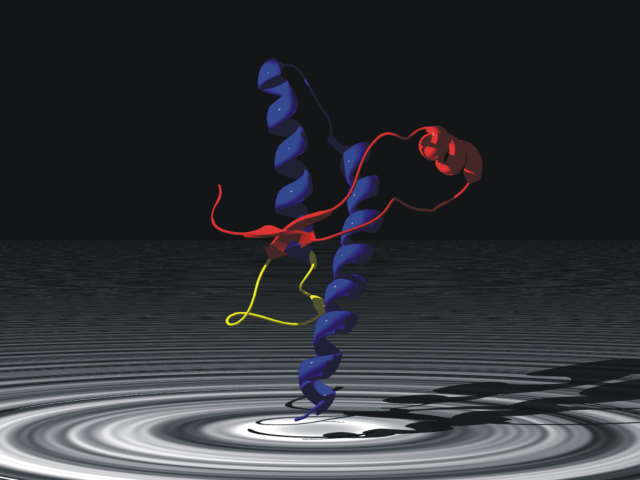 Good news in the battle for the brain: Researchers in Sweden and Switzerland have found that toxic prions–diseased variants of naturally occurring neural proteins–can be both detected and treated with a novel kind of self-illuminating polymer. In tests, the researchers have shown that their molecules can render prions harmless, paving the way for treatments for degenerative and potentially fatal nervous system diseases, including Alzheimer’s.

Prions are a big problem when they get loose in the brain. They tend to clump together in groups, affecting surrounding nerve cells and usually leading to brain damage and eventually death–sometimes a very rapid death. Illnesses caused by prions can be inherited, but they can also be spontaneous or spread through infection, as is the case with mad cow disease, a fairly well-known prion condition. Once prions begin aggregating and replicating in the nervous tissue they can populate at an exponential rate, making treatment very difficult.

The luminescent conjugated polymers, or LCPs, were tested at University Hospital in Zurich on brain tissue taken from mice infected with prions. Results from those tests showed that the number of prions present in the tissue decreased significantly after the introduction of LCPs, as did their overall toxicity–the first time such an effective treatment has been demonstrated. LCPs still need a rigorous scientific vetting of course, but the initial results are quite promising for the future treatment of diseases like mad cow and Creutzfeldt-Jacobs.

Moreover, the results could have implications for the treatment of that holy grail of neurological disorders, Alzheimer’s disease. Alzheimer’s isn’t a prion disorder, strictly speaking. It is caused by amyloid plaque buildup, which has a similar degrading effect on the brain but one that is slower to take effect than those associated with prion diseases. The researchers want to take their LCPs further and test them on fruit flies imbued with an Alzheimer’s analog disorder to see if they are effective at treating ailments similar to prion diseases as well.