The biofilms where bacteria congregate are like little apartment buildings 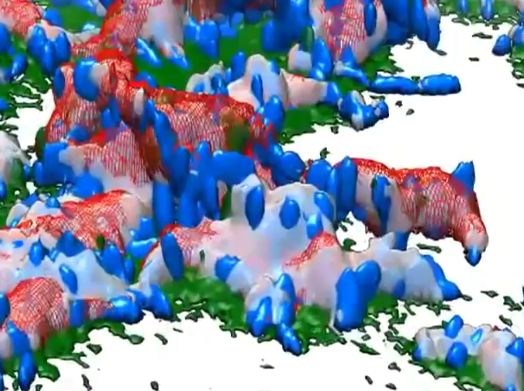 In an effort to outfox antibiotic resistance, a team of researchers based out of U.C. Berkeley–and including none other than Nobel laureate Steven Chu–want to build a wrecking ball that tears down bacterial cities. It’s not quite there yet, but in a paper released today the research group announced that via a new imaging technique it has for the first time revealed the structure of these biofilms — and where they are vulnerable to attack.

Biofilms organize themselves into complex structures when they colonize, and bacteria generally spend most of their lives as part of one of these biofilms. And while these very bacteria, taken individually, might be susceptible to certain drugs or antibiotics, they can be several orders of magnitude more resistant when they are fortified inside the protein shell of a biofilm. Biofilms are often the cause of chronic illnesses and wounds, because they are so difficult to uproot once they’ve taken root. Some can only be dealt with surgically.

But if bacteria find strength in numbers, the Berkeley team reasoned that the glue that binds them together is a serious weakness, and one that could be exploited to clinical effect. Veysel Berk, a post-doctoral in the physics department at the California Institute of Quantitative Biosciences at UC Berkeley first built a super-resolution telescope so he could physically observe the way biofilms developed, then devised a novel method of staining called continuous immunostaining to track individual target molecules throughout the process of biofilm construction.

His findings: Using a strain of cholera bacteria, Berk noticed that within roughly six hours of settling on a surface the bacterium laid down a kind of glue to attach itself in place before dividing into daughter cells. It cemented each daughter to itself before completely splitting in two, growing quickly into a cluster of firmly glued bacteria. The colony then began secreting a protein that encased the entire group–a kind of outer cement wall for the cluster that insulates them from the outside. These clusters further group themselves into biofilms, with tiny channels running between clusters to allow waste to pass outward and nutrients inward.

It’s a clever biological mechanism, but now that we can see what’s happening, we can target parts of this structure–either the initial glue binding the bacteria together or the protein cement encasing the larger cluster (or both). Collapse the outer wall, and it becomes vastly easier for antibiotics to get inside and dismantle the rest of the structure.

This imaging technique is not just a potential healthcare breakthrough. Biofilms exist everywhere–in plumbing and sewage pipes, on the hulls of oceangoing vessels, as the plaque on our teeth–so finding a means of breaking them down could have potential applications across industry and in environmental protection and remediation.