Even in places where potable drinking water is scarce, some kind of water is ofter obtainable–even if it’s the stuff … Continued 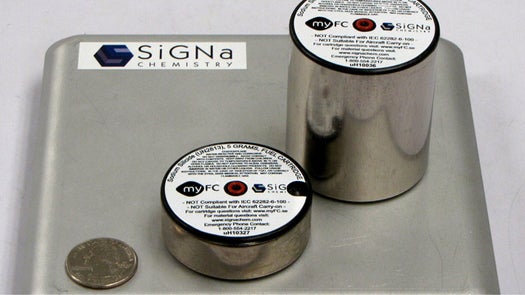 Even in places where potable drinking water is scarce, some kind of water is ofter obtainable–even if it’s the stuff that usually ends up in the latrine. SiGNa Chemistry Inc. is taking advantage of the hydrogen in that water with a new portable canister that can power a small fuel cell to juice up mobile electronics on the go. Think of it as fuel for a fuel cell; just add water.

This kind of technology isn’t entirely novel. We’ve written about magnesium-based power packs designed for the military that can generate power from saltwater (or a GI’s urine if needs be). And SiGNa itself has integrated its own sodium silicide technology into an electric-assist bike engine. But now the tech is being reduced to a canister that could fit in a pocketable fuel cell that allows users to recharge on the go.

SiGNa isn’t elaborating on all of the details of its proprietary sodium silicide tech, but it goes something like this: sodium is absorbed into silica, which makes for a grainy black powder that is stable in the open air for more than two years (so it has shelf life). Add water to the mix and a low-pressure reaction takes place that gives off hydrogen. Top that with a tiny, inexpensive fuel cell and you’ve got a tiny power plant fueled by water.

The sodium silicate leftover is a common element found pretty much everywhere, and the heat given off is negligible (and apparently some is siphoned back into the power-generating process.

The breakthrough here was simply slimming everything down to a pocketable size, meaning the replaceable sodium silicide cartridges had to be scaled way down. But the canisters are still big enough to give off 5 watt hours, or about the equivalent of 4 AA batteries, SiGNa’s CEO told Ars Technica. Which, as Ars points out, makes it unclear whether it may be just as easy to carry around conventional batteries. SiGNa hasn’t yet priced the canisters or said exactly when they’ll become avaialable for purchase, but you can bet that when they do they’ll retail for something close to the price of 4 AA batteries, for obvious reasons.