The “life is persistent” argument is often used to bolster the idea that life exists elsewhere in the universe. While... 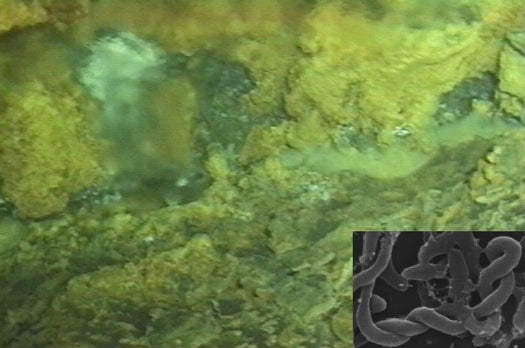 The “life is persistent” argument is often used to bolster the idea that life exists elsewhere in the universe. While that remains to be seen, the notion certainly keeps proving true here on the home planet. Scientists have found life thriving in near superheated ocean vents, in inhospitable parts of Antarctica, and in the depths of subterranean oil reservoirs. Now, a drilling expedition to the deepest layer of the Earth’s crust has found life there as well, and the evidence suggests there could be more life even deeper.

The Integrated Ocean Drilling Program – an international expedition that explores, samples, and analyzes the subseafloor – was drilling in the Atlantic Massif, a tectonically active region in the central Atlantic where the basalt layer that separates the seafloor layer from the underlying gabbroic layer is thin (just 230 feet). The team drilled more than 4,500 feet down where temperatures are just above the sea level boiling point.

In these high pressure, high temperature environments the team expected to find some life – they’d previously found micro-organisms living in the basalt layer above – but what they found surprised them. They found a lot of life, mostly communities of bacteria that had evolved to feed off hydrocarbons like methane, similar to the ones found in oil reservoirs. That suggests the bacteria might not have evolved there in the gabbroic layer, but migrated downward from the layers above.

Further, finding life that deep that survives off hydrocarbons suggest that they might find life even deeper still, all the way down in the mantle. The processes that produce oil and gas in the crust could conceivably also happen at deeper layers. If they do, that means life could reach deeper into the earth than previously imagined. And if life is thriving that deep beneath the Earth’s surface, who knows where else in the universe it might be hiding.