New Metamaterial First to Bend Light in the Visible Spectrum

We’re one step closer to the stuff of sci-fi and boy wizards. Researchers at the California Institute of Technology have... 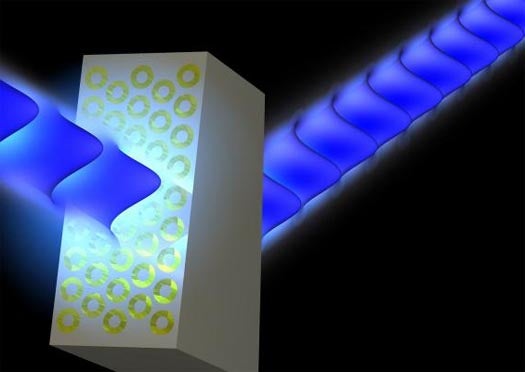 We’re one step closer to the stuff of sci-fi and boy wizards. Researchers at the California Institute of Technology have engineered a metamaterial with a refined 3-D structure that gives light a negative refraction index upon entering the material. Put another way, it bends light the opposite way one might expect, irrespective of the angle or polarization of incoming light waves. Put yet another way: We’re getting closer to that invisibility cloak we’ve been looking for.

Metamaterials, of course, are artificial materials engineered to exhibit properties that don’t come easily in nature. Such materials could have a range of applications, from superlenses to solar cells to active camouflage. And while this isn’t the first light-bending metamaterial we’ve ever seen, it is the first one that operates on visible light, doing all of its negative-index refracting in the blue part of the spectrum.

Not only that, but this new metamaterial is simpler than previous attempts at negative-index metatamaterials. It requires only a single functional layer, yet is seriously versatile, handling light at any polarization and functioning at a wide range of incident angles. That could potentially enable superlenses that image past the diffraction limit, solar cells that are able to scoop up a lot more sunlight, and even invisibility cloaking.

Previous metamaterials required several layers of resonant elements to create this negative-index response, but the Caltech method requires only a single layer of silver with plasmonic waveguide elements distributed throughout that route the light waves through the material. Involving only a single layer in the process means this new material is easier to manufacture and easier to tune to different wavelengths of light.

While it’s more fun to think about a Harry Potter-like invisibility cloak, the real breakthrough here could be in solar gathering technology. The fact that this metamaterial is tunable means engineers could potentially tweak it to better sync with the solar spectrum, manufacturing solar cells with a far higher efficiency that could in turn make solar a more feasible alternative to fossil fuels. Which is almost — but not quite — as exciting as an invisibility cloak.