The material could create an infinite range of different colors and shapes. 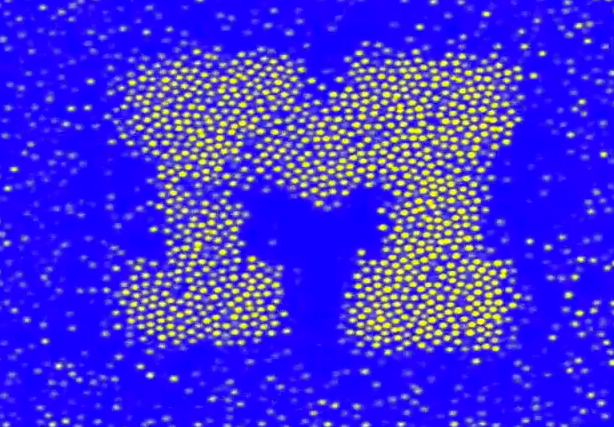 Humans are good at making things that are one color. But if you want to really blend into your surroundings, it would be best to have a material that can change its appearance based on its surroundings–like a chameleon. University of Michigan researchers have created a material imbued with a special type of crystal that can change its shape and color when different wavelengths of light are shone on it, that could be used in the future to create active camouflage.

As you can see in the video below, when the light is on, the crystal particles come together to form an “M,” a process that is reversed when the light switches off.

The material is made up of a semiconducting metallic sheet made of indium tin oxide, which is transparent and used in many types of displays, monitors, and screens, explained Michael Solomon, a chemical engineer at Michigan. Above that rests a layer of solution full of the aforementioned crystals, which are chemically similar to the particles in latex paint and synthesized in Solomon’s lab. When the light turns on, it creates a positive or negative charge in the metallic layer, which the particles either rush toward or away from, causing a visual change in the surface.

Before, this was impossible to do without having some sort of template or pattern on the underlying material, Solomon told Popular Science. But with this technique, the material is the same, and adjusts its shape to the light. “There’s nothing on the surface that locks you into a certain kind of shape, and it can be turned on and off,” he added.

Right now the patterns are created by the shape of the light (for example, the M was created by an M-shaped pattern of light). But it may be possible to modify the system so that the colors are reflective of their surroundings, for example. “Though we haven’t done that… I think it’s possible,” Solomon said. The technology could also be used to create signs or fabrics or other materials that change their display or color when they encounter different wavelengths of light.

The chemistry of the crystals is described in a study co-authored by Solomon, doctoral student Youngri Kim, and Aayush Shah, and published today (April 23) in the journal Nature Communications.