Could a Human Beat a T. Rex In Arm Wrestling? 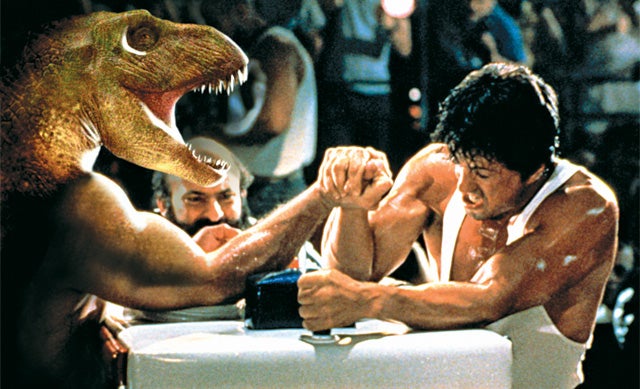 “First, we’re assuming that the T. rex won’t just eat the person, right?” asks Jack Conrad, a vertebrate paleontologist at the American Museum of Natural History in New York. Right. This is a sanctioned match, and killing your opponent is strictly against the rules. Who’s coming out on top?

“Doesn’t matter,” Conrad says. “There’s no chance that any human alive could win.” The T. rex’s arms might have looked wimpy, but they were extremely strong. Each was about three feet long and, based on the size of the arm bones and analysis of the spots where muscle attached to the bone, they were jacked. “The bicep alone—and this is a conservative estimate—could curl 430 pounds,” Conrad says. Even the beefiest humans max out at around an embarrassing 260 pounds.

Surely an Over the Top–era Sylvester Stallone would put up a good fight? “Not even Lou Ferrigno in his prime would stand a chance,” Conrad says. “They didn’t just have big biceps. Their chest and shoulder muscles were huge too. They had huge arms and shoulders—bigger than my leg. They had the strength to rip a human’s arm right out of its socket.”

There is a chance, however, that your competition might not be able to put all that beefy muscle to use. There are dozens of hypotheses about what the T. rex used its arms for, Conrad explains, but the ones taken most seriously involve pushing itself up if it was lying on its belly, tossing big chunks of meat into its mouth, or holding onto females during what scientists suspect was a very vigorous mating routine. These ideas are favored because such actions required Barbie doll–like up-and-down motions of the arm, and fossil evidence indicates that the dino king was incapable of rotating or twisting its arms. “The T. rex probably couldn’t have done the arm-wrestling move,” Conrad says. “So maybe you could get him on a technicality.”

Ask Us Anything
Dinosaurs