We're still seeing products guaranteeing the truly immersive experience videogames have always promised--but why don't we have them by now? 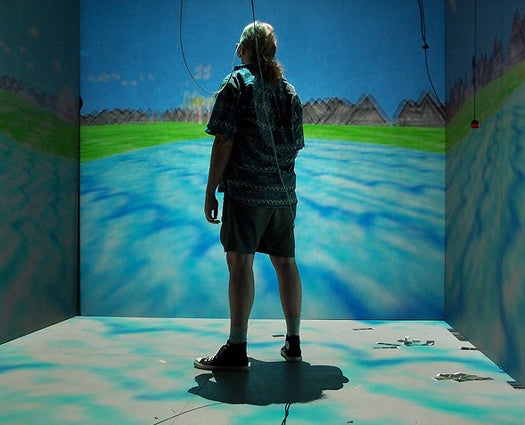 GameSci is a new column on the science of videogames–the ways psychology, technology, and art are bringing play into the future.

At the start of August, we got a tantalizing look at something we’ve heard about for decades, always seeing glimpses of, until it’s reached where’s-my-jet-pack levels of furor: a satisfying, mass-produced, consumer-ready virtual reality game. The Oculus Rift was on Kickstarter August 1 through September 1. Now it’s racked up $2.4 million.

In the promotional video, Oculus founder Palmer Luckey laments how no equipment out there was good enough to “plug in and actually be in the game.” It’s yet to be seen what the Rift will do–it only has a single game planned for release, _Doom 3_–but it’s a sentiment a lot of gamers share. That raises the question, “Why not?” Why don’t we have a virtual reality system in every home? It’s a case where our heads and out hearts are at odds. “Our heads” meant to be taken literally.

It doesn’t seem like evolution has primed us especially well for accepting a computer-generated world. It’s disorienting; it’s weird. But we’ve tried, and gotten arguably close. We recently reviewed laser tag guns that employed “augmented reality”–something like the missing link between our real world and a virtual one–and it did a great job at an affordable price. One of the few complaints I had was that the swarms of mechanical drones, which swooped in on you against the backdrop of the real world, seemed a little fake. But that’s not the creators’ fault.

We have a little thing called depth perception. It’s great–unless what you’re trying to perceive isn’t actually there. A team at Mississippi State University has spent years trying to work out that conundrum, making virtual objects precise to the millimeter for use by surgeons and soldiers, but we’re not there yet, whether you’re a doctor or a gamer.

And what about the real deal? The totally immersive brand of virtual reality, not this wishy-washy “augmented” thing? That’s tricky, too, but there’s some fascinating stuff going on. Take this (slightly dystopic-looking) research that came out in June.

If you didn’t catch that, here’s a cheeky cartoon explaining the experiment.

What the researchers did amounts to real-life DVR. First they took a subject into a room with a video camera, had him put on a virtual reality headset, then asked hm to shake their head around to “try it out.” While they were doing that, they switched to a recorded video, and the subject often wasn’t the wiser–until the recording showed the subject himself walking into the room. They added one more layer after that: the researcher popped up on the end of the room to say it was all a just a recording. But (ha ha) that was a recording, too. Finally, the researcher revealed his live-and-in-person self.

A pre-recording is still reality, of course, just out of sync with real-time. But at the very least, it shows how we’re able to accept a world that’s not there. It’s not the same as a computer-generated game–we still need the world to be recognizably our world, and to be unaware when we dip out of real-time–but it’s interesting to consider. In an August IGN article about Doom 3, to be ran on the Oculus Rift headset, a related problem was pointed out: delay. There’s going to be a slight lag between the action you make and the action happening on-screen (or on-headset), which can create the distinct feeling that you’re playing a game.

This isn’t all to say we’re never going to get our hands on a great virtual reality system for games. The Rift, for what it’s worth pre-release, generated solid reviews from critics trying it out at the gaming convention E3. But learning to fully accept a different world is disorienting, whether it’s dropping you into a science-fictional universe or a pre-recording of the real one.