_Zero Point _is a documentary from Danfung Dennis on how virtual reality has, and will, change our lives--and it's being produced entirely for Oculus Rift. 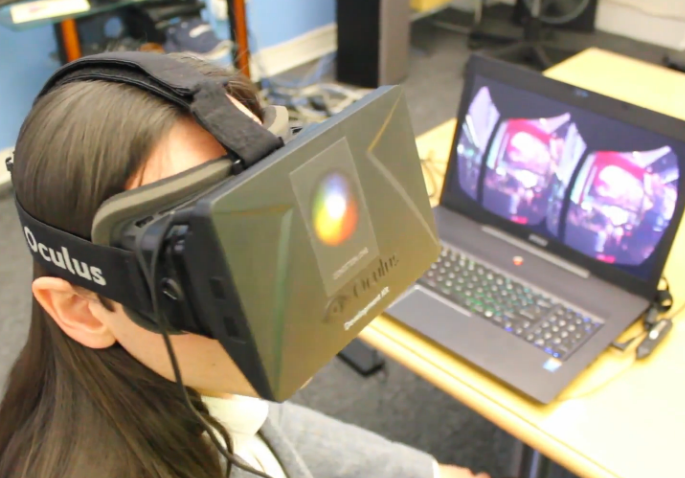 I’m floating toward the space station, the curvature of Earth visible below me. I’m pulled as if by tractor beam, but with enough time to turn and look behind, down, and dead ahead. My stomach churns. I feel like I might break off and drop into orbit any minute.

I’m in a desert warzone I can’t identify. Camoflaged soldiers give a man in a truck passage. In a blink, small arms fire is resounding and orders are shouted between troops. I scan the buildings and alleys for the source while the soldiers move ahead, ducking between corners for shelter. I don’t realize it’s a drill until I see the safety-orange tips of their guns.

I’m at E3, the international gaming conference, being ferried through a crowd of strangers all bathed in the transluscent blue light of screens. I try to look across the scrum, tilting my head back and forth to peer over heads, hoping to make eye contact with myself. I was there, after all.

I take off the goggles strapped to my face and I’m in the meeting room of a New York office building, looking at the smiling, long-haired documentarian Danfung Dennis, whose latest footage I’ve just been previewing through the virtual reality headset the Oculus Rift.

Dennis is a filmmaker with experience in immersion (although maybe not quite like this). For his 2011 work of film reportage Hell and Back Again, he embedded with troops in Afghanistan, then followed one, Sergeant Nathan Harris, back home to North Carolina, for a full portrait of a country at war. Critics responded: Dennis, who’s also a photojournalist, received the Grand Jury and cinematography prizes at Sundance that year, and even took a 2012 Oscar nomination for best documentary feature. “Hell and Back Again stacks one astonishing shot atop the next: perfectly composed tracking sequences in the heat of battle; saturated moody low-light compositions in rainy North Carolina parking lots; gorgeous rich soundscapes,” the _New York Times _wrote.

For his next film, Dennis created an entire visual technology company, Condition One, and teamed up with a group of graphics engineers for a very different movie: Zero Point, a meta-documentary about the past and future of virtual reality. Leading a crew armed with an array of high-resolution cameras that covered a 360-degree field of vision, then stitching and syncing the footage into one seamless view, Zero Point _is built from interviews with virtual reality evangelists and researchers from Ivy League schools to the military. The experts all weigh in on why VR tech adoption is growing, and what it means for the world of tomorrow. “There’s this rapid acceleration of innovation, because of a whole slew of different factors, but primarily driven by mobile devices–these screens are getting so small, so light, so cheap that we’re able to put them very close to our eyes and fill our field of vision, and partially convince the brain that you _are somewhere else,” Dennis says.

Yes, it all sounds like a hell of a headtrip, but if you’re into technology or film, it’s hard not share some of Dennis’s excitement in the project. “We know that this is a fundamentally new form of communication, it’s this new visual language, and we need to invent the syntax and the grammar for how to effectively communicate a narrative and experience when you have no control over where the user could be looking.”

Put like that, the concept sounds more like a game, which is exactly what the majority of Oculus Rift projects have been created for. Dennis, who’d already made the transition from war photojournalist to videographer on the hunt for more immersive experiences, founded Condition One to marry virtual reality to documentary footage, developing a video engine that can translate data from multiple cameras to a 360-degree view. Instead of being plopped down in front of a screen to take in a film, turning occasionally to shush the person behind you in a theater, the viewer is there, no matter where they look.

But, while obviously a believer in the power of the technology, Dennis keeps a detached perspective on its pros and cons. There are endless studies about the benefits of virtual reality: how we can learn to empathize more with others while using it, or how we might use it to exorcise pain. But move the idea to the far end of the dial, and maybe we won’t like what we see. “We’re also looking at some of the implications of this question that keeps coming up, whether it was researchers at Stanford or at USC or just people who had tried the Rift for the first time, which is: what happens when we don’t want to leave?”

If you want to ease in to tuning in, turning on, and never dropping out, you’ve got time: a truncated version of _Zero Point _is set for release this spring, ahead of a wider release for when the Rift gets into the hands of consumers. (Right now, the Rift is a developer-only gadget; Dennis is hoping for feedback from them before the final cut.) In the meantime, soak up the real world while it lasts.

Video by Gabe Bergado. Footage provided by Condition One.