Best known for aliens and Elvis, this remote town is now at the vanguard of a global revolution

How folks in rural Australia are pushing back against climate change. 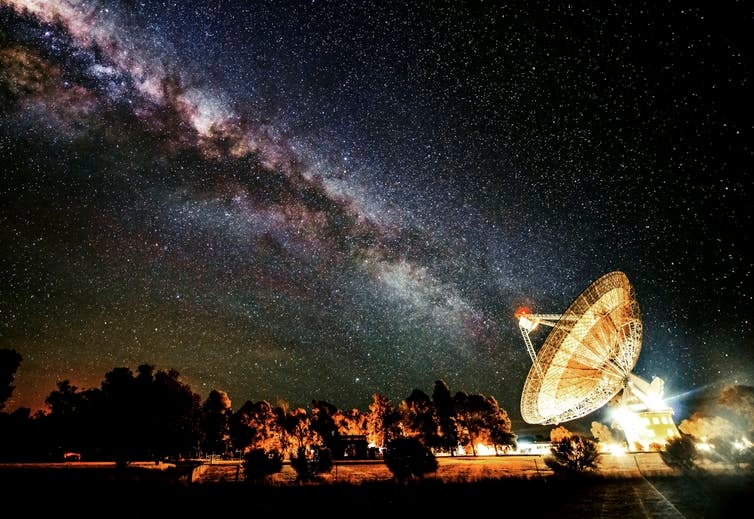 The radio transmission set off from the Sea of Tranquility on the near side of the Moon. In a little more than one second, it crossed the 200,000 miles separating Earth from its nearest celestial neighbor, racing toward its final destination. But, before heading on to Mission Control in Houston and then to televisions around the globe, it visited a rural Australian outpost, where the operators of 200-foot radio telescope listened to those fateful words ring out.

“That’s one small step for man, one giant leap for mankind.”

Chart a map of human history, and you will find Parkes, Australia at the precise center, drawn equally toward the old and the new, the past and the future. Parkes is home to the radio telescope that beamed Neil Armstrong into living rooms everywhere — a facility later deployed by no less than Stephen Hawking in the search for extraterrestrial life. But the town of less than 12,000 is principally an agrarian community, comprised of farmers who raise cattle and grow wheat, more connected to the ground beneath their feet than the stars above their heads. Even its relationship to art and music betrays a certain timelessness. Parkes is both the birthplace of one of Australia’s leading country music artists and the site of its biggest Elvis festival.

It was here, where, faced with a years-long drought that desiccated farms and depleted farmers, Parkes looked once again to the future. Locals responded to the Big Dry not with complacency or fatalism, but by strapping on their rhinestones and building one of the largest solar farms for a thousand miles.

“We had just been through what we referred to as the Millennium Drought, and people were very concerned about climate change and the effect it was having on our community,” said Parkes Mayor Ken Keith, a high school science teacher turned sheep farmer who has served on the Parkes Shire Council since 1983.

“You can do as much preparation as you can for a drought — put away stored fodder and so forth to feed your livestock — but there comes a time when, if the drought goes longer than 12 months, then it gets very difficult to justify buying additional food to keep animals alive,” he said, explaining that when fields go dry and barren, cattle and sheep go hungry, and farmers are forced to sell their livestock.

“It does have an effect on the economy,” he said. “The North Parkes copper mine was very important to a lot of farmers during that Millennium Drought, because a lot of people were able to get some employment there driving trucks and things at the mine to keep them afloat at the farm.”

In the wake of the drought, the town committed itself to the fight against climate change. The council brought homeowners together to buy rooftop solar panels in bulk and installed photovoltaic cells on public buildings. Most impressively, the council laid out plans for a $105 million solar farm that would power up to 21,000 homes. “It actually adjoins my property, so I get to look at it every day from the hill on my place,” Keith said.

Parkes has plans for two more solar installations nearby, a move driven as much by worries about climate change as by the high cost of power. “We will nearly be able to generate as much energy as we consume in our shire once those other solar plants are completed,” Keith said, adding that the town’s new sewage and water treatment plants will also feature solar panels.

“We have to pump our water from a river and an aquifer 35 kilometers away. It costs us a million dollars a year to pump that water. So, if we can generate our own power, then we can save some of those pumping costs,” Keith said. He explained that Parkes has also built a water recycling facility to guard against future shortages. “We put recycled water on our sporting fields, golf courses, wheat fields and things, so that we get two uses of the water after it has been pumped, and we have some savings there as well,” he said.

Where other politicians might waffle on climate and energy, Keith is decidedly frank. “Look, particularly in the rural communities, there are people out there who think climate change is not happening, that it’s just a natural cycle,” he said. “The science is irrefutable that it is happening, and we need to do our little bit.” He noted that, across Australia, climate change is fueling drought, heat waves, wildfires and intense rainfall. “We’re seeing more extreme events in our area,” he said.

Parkes stands out in Australia, where the conservative government has done little to address the carbon crisis. “Politically, we are seeing a lot of federal inaction on climate change, so it’s really the states and territories and also local governments that are picking up the slack,” said Alix Pearce, director of the Cities Power Partnership, which is working with Parkes and other local governments to tackle climate change. She said that Parkes is “the definition of a renewable-energy trailblazer.”

Other advocates agreed. “Parkes is showing real leadership around this issue,” said Fiona Ivits, media advisor for Australian climate nonprofit the Climate Council, which oversees the Climate Power Partnership. “Other towns and cities around them are beginning to pick up the pace. I think it’s a really powerful testament to how a bit of leadership and vision at that local government level can actually have a fairly wide-ranging impact.”

Parkes is well-positioned to proselytize about clean energy. Though remote, the town attracts visitors from all over the country. The Elvis festival alone draws more than 26,000 people, up from a couple of hundred when it started in 1993. “It took ten years to become an overnight success,” said Keith, who likes to dress up for the festival. “I’m not sure I’m quite an Elvis impersonator, but I do put an Elvis suit on.”

Parkes also lies at the intersection of a railway from Sydney to Perth and a planned railway connecting Melbourne and Brisbane. “We are starting to evolve a national logistics hub here,” Keith said. “We might well become the Chicago of Australia.” Once the new line is completed, Parkes will draw yet more visitors. More people will come and see what the town has accomplished.

It was nearly 50 years ago that Parkes linked two distant explorers to the rest of humanity, offering a dazzling glimpse of what the future might hold. In the decades since, the town has not lost a shred of its pioneering spirit. It now finds itself at the forefront of a global revolution, replacing fuels that have done so much violence to our planet with the latest in clean energy technology. Each solar panel, each battery may be one small step, but together they herald a giant leap for mankind.